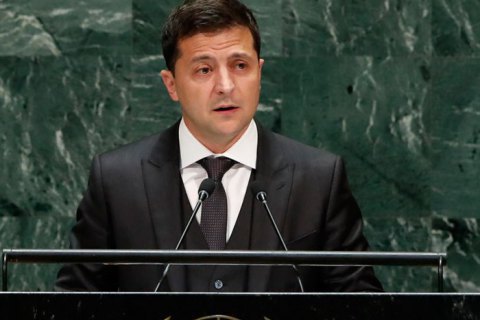 President Volodymyr Zelenskyy has said that the United States, the European Union and Ukraine should work together to stop the war in Donbas.

He said this during an open part of his meeting with Donald Trump in New York.

"My priority is to end hostilities in Donbas. We must return Crimea and Donbas. Therefore, I thank you for your help along this path. We need true support. We thank all the EU countries but we need more. I understand: only the United States, the EU and Ukraine together will be able to stop the war," Zelenskyy said.

Trump once again noted that Russia occupied Crimea not under him but during the presidency of Barack Obama.

“During our conversation, we noted that the United States provides much more help to Ukraine than, for example, the EU countries. And they should feel guilty for this since your country is important for the EU from a strategic point of view. And they should give more help. They said they would like to help more but in practice they have failed to do this so far," he added.

Earlier, Zelenskyy announced plans to expand the Normandy format of negotiations on Donbas at the expense of Britain and the United States.

Former Ukrainian President Petro Poroshenko repeatedly said that the problem of the Normandy Four is not in its composition but in the Kremlin’s reluctance to ensure a peaceful settlement.