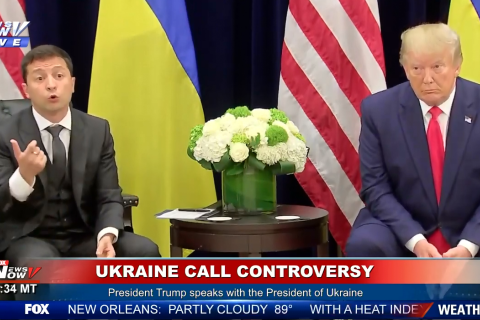 Ukraine President Volodymyr Zelenskyy has denied that Donald Trump put on pressure on him to persuade him to probe the activities of former Vice-President Joe Biden and his son Hunter in Ukraine.

"I think you have already read it [the transcript of the 25 July phone conversation]. I do not want to be pulled into the democratic, open elections in the United States. We had a good, normal conversation. We touched upon many things and no-one put pressure on me," he told journalists after his meeting with Trump in New York.

Trump confirmed there was "no pressure".

"I want him to do everything he can - it is not his fault, he was not there yet, he is new - to defeat corruption," Trump said.

He added that Hunter Biden earned "millions of dollars" in Ukraine, questioning their origin.

He suggested that Zelenskyy was elected president largely because the people of Ukraine expected him to fight corruption. "If he succeeds, he will do a favour to the whole world," he said.

In September 2019, a whistleblower from the US security services who heard Trump's phone conversation with Zelenskyy in July 2019 decided that the US president shared information with the Ukrainian leader which concerned national security and could be detrimental to the USA.

Allegations were made that Trump put pressure on Zelenskyy to investigate Biden's activities in Ukraine or risk a suspension of US financial aid to Ukraine.

An impeachment procedure against Trump was formally launched on 24 September.

The next day the White House published the summarry transcript of the Trump-Zelenskyy conversation.