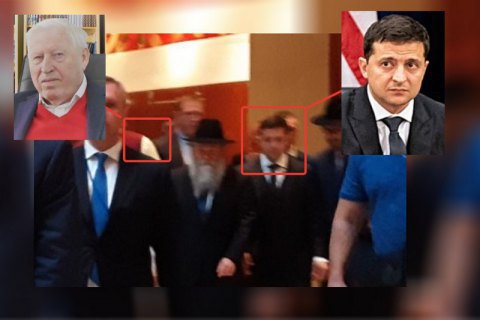 The presidential office has said that President Volodymyr Zelenskyy did not meet Soviet-born US businessman Sam Kislin during his visit to the USA.

"The information about the meeting shared by Russia's The Insider and the Ukrainian programme 'Schemes' is fake," the presidential office told Interfax-Ukraine.

Yesterday, The Insider said that Kislin attended a meeting between the US Jewish diaspora and Zelenskyy and published a photo allegedly showing the businessman. However, only a shoulder of what it described as the man in question is visible on the picture, a meter away from Zelenskyy.

The website also said that Kislin had attended one more meeting among fewer people where Zelenskyy was allegedly represented by presidential office head Andriy Bohdan.

However, Bohdan said on Facebook that he had never met "American citizen Sam Kislin either in the USA or in Ukraine".

According to some media reports, in 2014 Kislin bought Cyprus-registered Opalcore Ltd. for $8m on discount. The company had impounded bonds worth $20m on its accounts in Ukrainian banks. The total value has reached around $23m with interest. However, he has not received this money because it was confiscated on the ruling of the Kramatorsk court in ex-President Viktor Yanukovych's case.

Kislin has allegedly been trying to recover the money by building contacts with the new Ukrainian authorities with the help of the diaspora.