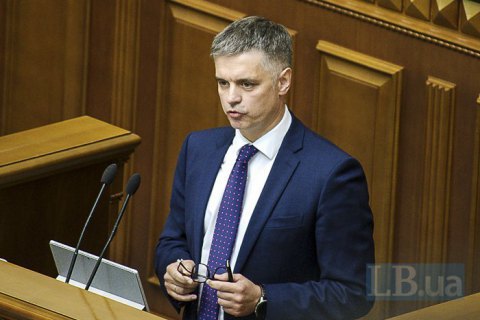 Ukrainian Foreign Minister Vadym Prystayko has said that the so-called "Steinmeier's formula" for Donbas means nothing without two more laws which parliament is yet to pass.

He said this at a briefing with Latvian Foreign Minister Edgars Rinkevics in Kyiv.

The minister complained that the public and experts rushed to dot the I's while the Foreign Ministry is still looking into possible consequences.

"Everyone already knows everything, especially people who oppose it, on television and in the press," he said.

"Steinmeier's formula itself does not mean anything unless there are a law on elections and a law on special status. The most important point is what these laws will be. The formula itself only explains how they will be applied," the minister added.

He added that MPs are yet to pass these laws, and only after that it will become clear to what extent Steinmeier’s formula is acceptable to all parties.

"Until it is known what red lines and what opportunities for compromise our MPs have, it is difficult to talk about potential results," he said.

"As for whether we have plans B, C and D, we have, but it’s obvious that we will not talk about them until there is an opportunity that the Normandy Four leaders will discuss," the minister added.

On 1 October, in Minsk, representatives of the trilateral contact group (TCG) and DPR and LPR militants agreed to embed the so-called "Steinmeier formula" in Ukrainian legislation. Ukraine refused to sign one document with representatives of the militants, so this was done in the form of separate letters to the OSCE, one of the parties to the TCG.

The formula provides for the temporary entry into force of special status for Donbas on the day of early local elections. The law will continue to operate on an ongoing basis if the final OSCE/ODIHR report confirms the democratic nature of the elections.