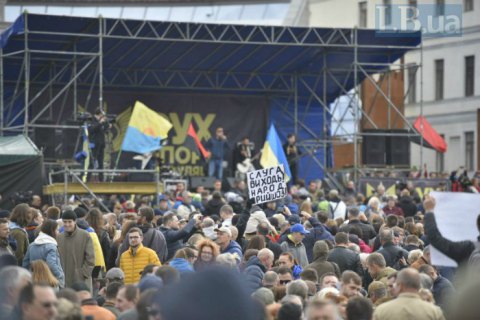 Activists who gathered in Kyiv's Independence Square (Maidan) have announced the establishment of a movement of resistance to capitulation. The resolution of the 6 October people's assembly was read out from the stage, an LB.ua correspondent has reported.

"In order to counter capitulation and protect the statehood, veterans, volunteers, scientists, experts, journalists, public organizations and activists have created a public supra-party movement of resistance to capitulation," the resolution reads.

The movement has allegedly already brought together "dozens of political parties and public organizations".

Participants in the meeting called on the Voice, European Solidarity and Fatherland factions to create another opposition platform in parliament, "No to Capitulation", and build work with the resistance movement.

The resolution also calls on the president, parliament and the Cabinet of Ministers to adhere to the current law on the peculiarities of state policy and ensuring compliance with state sovereignty in the temporarily occupied territories of Donetsk and Luhansk regions, which was adopted in early 2018.

“Russia is the aggressor and should be fully responsible for crimes against Ukraine and the situation in the occupied territories. Donbas and Crimea should return to Ukraine together without any conditions from the Kremlin,” the resolution reads.