Parliament had a busy morning on 2 October after the scandalous announcement that "Steinmeier's formula" for Donbas had been agreed in Minsk. Outside its walls, drivers of vehicles with foreign registration, who protested against customs regulations, were blocking traffic, the nationalist Right Sector was protesting against the planned opening of the land market in Constitution Square alongside far-right Freedom, which yesterday said that what Zelenskyy did was "Ukraine's capitulation" to the Kremlin. 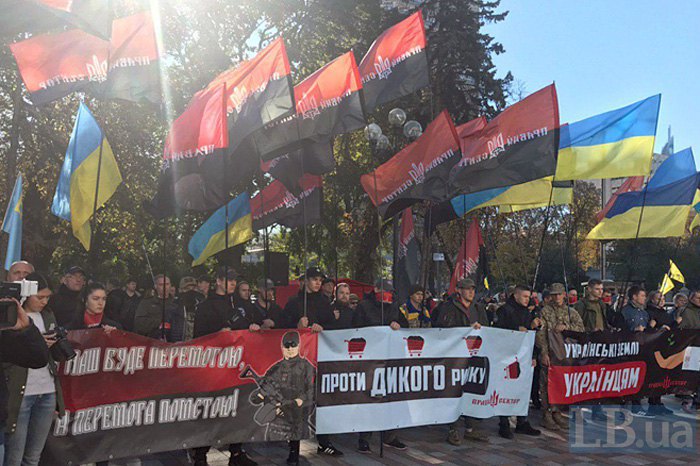 The session did not start at 10 a.m. Deputy speaker Ruslan Stefanchuk told a nearly empty chamber that "the start of the session was being delayed for technical reasons". 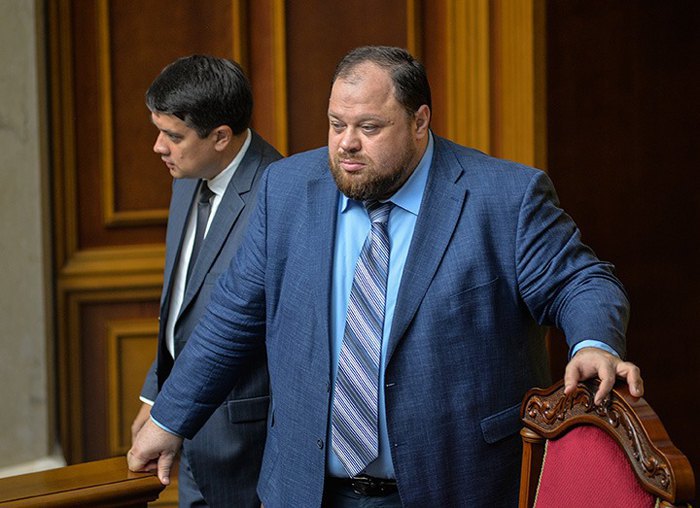 MPs were enjoying themselves while waiting for a majority to convene. Representatives of Opposition Platform-For Life glued a poster saying "I am against censorship" to the rostrum. The head of the committee for the freedom of speech, who came up with the idea of the banner, Nestor Shufrych, theatrically strolled on the sidelines with his mouth covered with black tape. Female MPs from the Voice faction spoiled the performance of Medvedchuk's allies. They painted "PTN-PNKH" [a popular anti-Putin abbreviation] with red lipstick on the banner, after which MPs from Opposition Platform-For Life had to remove it. 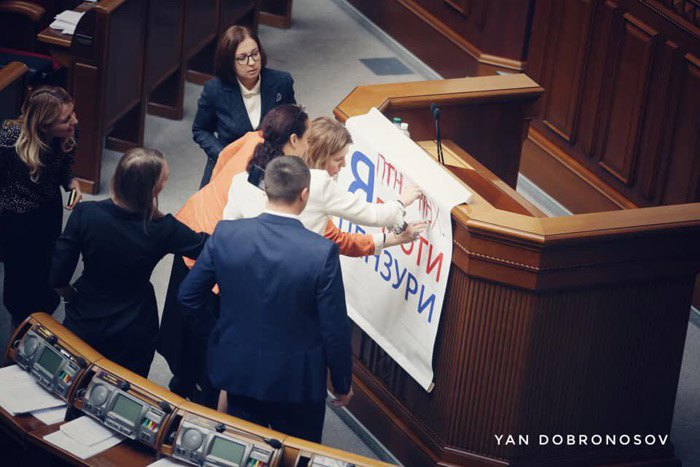 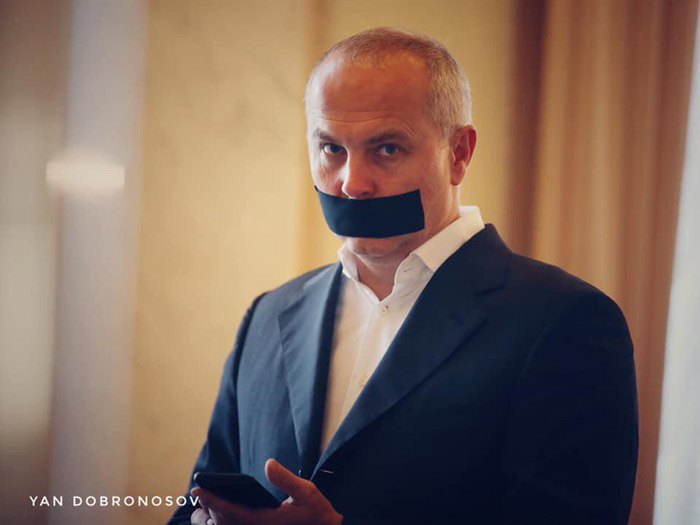 LB.ua learnt from its sources that the session was delay because of the urgent visit to parliament by the head of state. Initially, Zelenskyy decided to hold a closed-door meeting with faction leaders to make it clear whether accepting the formula was a betrayal of national interests.

"Yuriy Boyko represented Opposition Platform-For Life, Serhiy Rakhmanin from Voice, Yuliya Tymoshenko from Fatherland, Petro Poroshenko was not there and Iryna Herashschenko was there on behalf of European Solidarity, and Taras Batenko represented For Future," one of the participants in the meeting told LB.ua. "My main impression is that the president was clearly nervous. I would even say he was more nervous than we would have thought. The meeting was very emotional. The president's first message was that nothing awful happened in Minsk, nothing will happen in the future without parliament, consultations, and joint drafting of a bill on special status of Luhansk and Donetsk regions. So he promised us. It was initially planned that we would talk for 20 minutes at most but it took almost an hour longer." 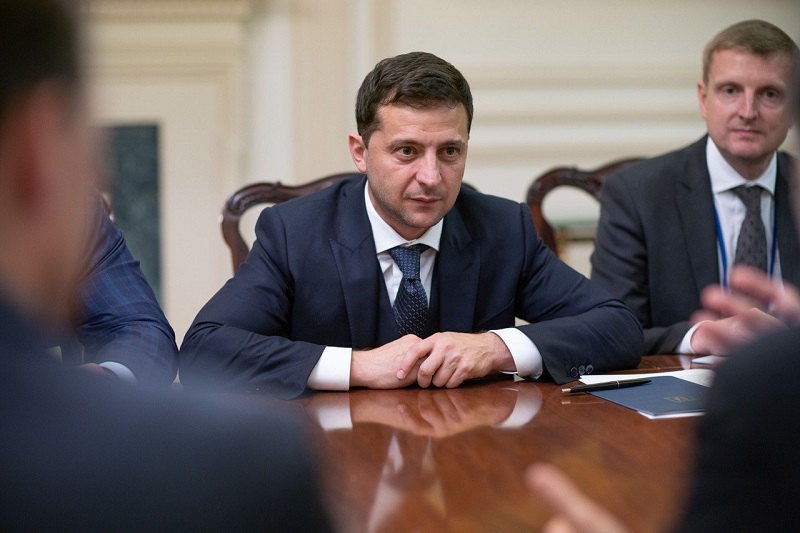 According to the source, Zelenskyy showed a copy of the letter outlining "Steinmeier's formula". "The text is identical to the one which was shared on the Internet. We asked the president very many questions: about the border, disengagement, conditions of holding elections in the occupied territories. As a result, he did not persuade me, for instance. Now there are more questions than before. His answers were as ambiguous as at the president's briefing yesterday," a faction head present at the meeting said. 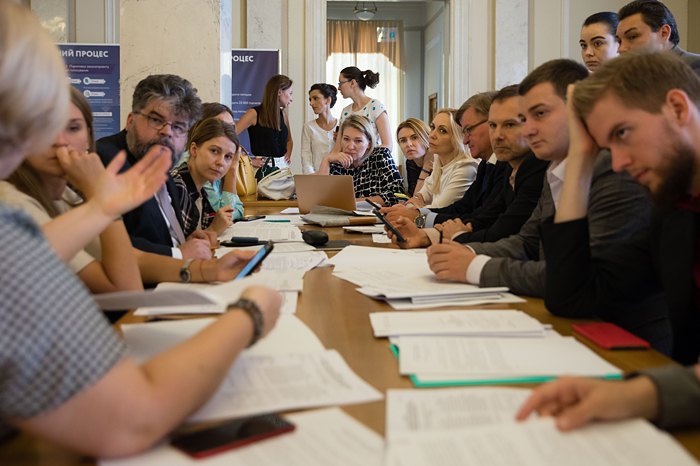 Political briefing for Servant of the People

Meanwhile, Servant of the People MPs were waiting for the president in Katrusya's Cinema, a conference room in the basement where Viktor Yanukovych used to meet with the Party of Regions and Petro Poroshenko with his bloc.

Sources told LB.ua that the president had a brief meeting with the faction, which took 15 minutes at most. It was also attended by presidential office head Andriy Bohdan. 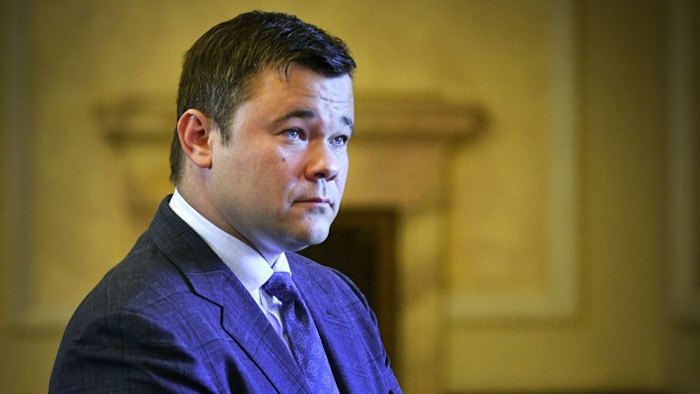 "The president tried to persuade us that 'Steinmeier’s formula' does not threaten territorial integrity, and that elections in Donbas will only be held after the withdrawal of Russian troops," one of Servant of the People members noted. "He emphasized that, in fact, 'Steinmeier's formula' has nothing to do with what is being shared in the media, and there is no harm there." And that the law on special status of Donbas will come into force only after the election, the withdrawal of troops, when the border is ours. He explained that we did not sign the document but only accepted the text for discussion, which is based on Sajdik’s letter. And that this formula is our only opportunity for negotiations in the Normandy format."

LB.ua sources say that nobody expressed protest or discontent during the meeting with the president. However, one of MPs noted: "There are dissenters but no-one dared to say something critical to the president in the face." 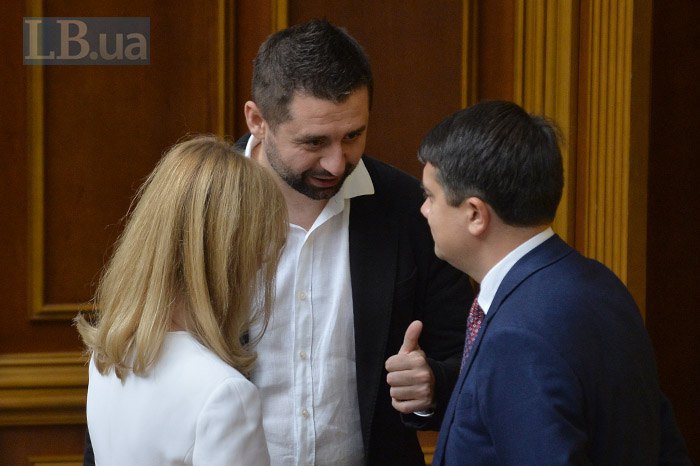 After the meetings, Servant of the People faction head David Arakhamiya told journalists that all were pleased with them. Reportedly, there was even a constructive discussion with all faction heads.

At around 11 a.m., speaker Dmytro Razumkov opened the session after all. He first gave the floor to Voice faction head Serhiy Rakhmanin, who invited Zelenskyy to the chamber to explain his position to the Ukrainian people as well as MPs.

"Today, society, every mother, every serviceman on the front line should hear what this formula means in a plain human language... The presence of the president in this chamber is extremely important," he said. However, Zelenskyy had already left parliament by that time and obviously did not want to return. 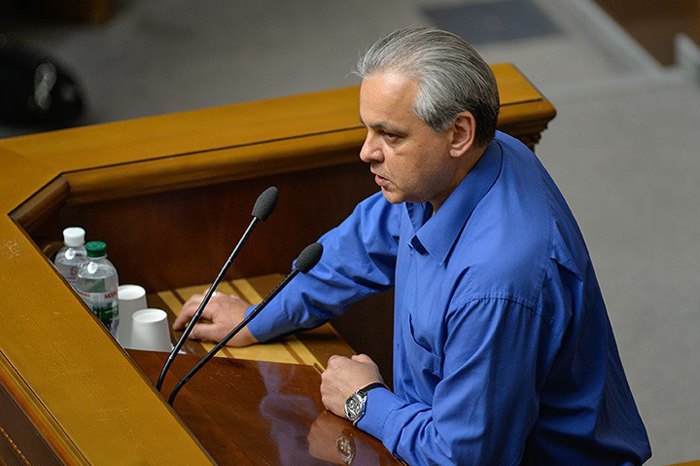 Opposition Platform-For Life was the only force that supported the implementation of the same "Steinmeier's formula". Speaking next from the rostrum, Shufrych said that "everyone needs peace, economic stability and a better life...".

The fifth president and a member of European Solidarity, Petro Poroshenko, predictably said that there was no such thing as "Steinmeier's formula", only "Putin's formula". He was outraged by the fact that the new government removed the issue of a peacekeeping mission's participation in deoccupation from the agenda. He said that elections in Donbas cannot be held until the complete withdrawal of troops. "The security issue must be above the political one... We must be united in the external arena despite our internal political differences," Poroshenko said, accusing Zelenskyy of "delivering a serious blow to our positions in Europe and the world" as a result of the publication of a scandalous transcript of his telephone conversation with Trump. It reportedly weakened our lobby and support from France and the United States in the confrontation with the Kremlin. 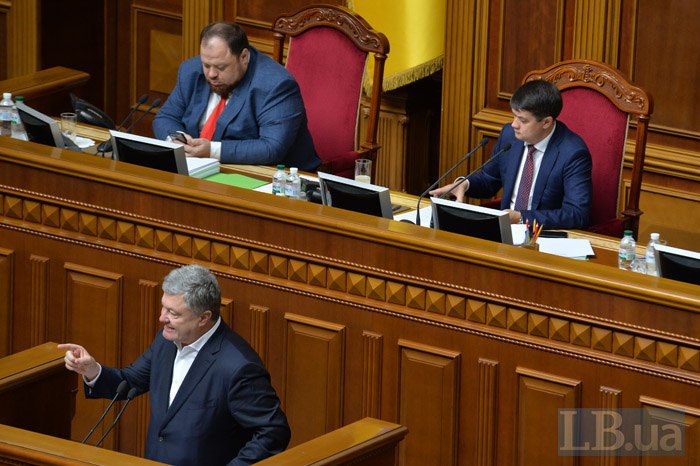 Fatherland leader Yuliya Tymoshenko was next to pour criticism on the authorities. She reasonably noted that most politicians, not to mention ordinary people, do not fully understand what this formula is. And most importantly: what it really offers and what consequences it may have for Ukraine.

"If Steinmeier’s formula is passed, elections will be held at gunpoint and without the people of Ukraine, this means the Dniester region... This means that any next election of the president or parliament will mean 5.5 million falsified ballots and we will be a colony again," she said. 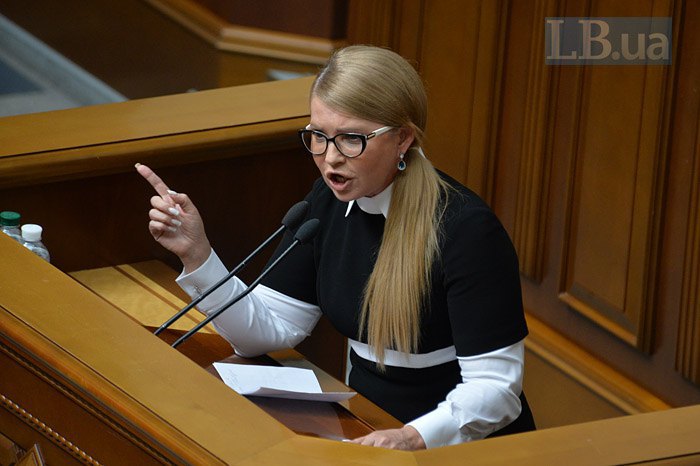 "And it provides that elections to local authorities and their legalisation in the occupied territories will be held without the demilitarisation of Donbas and without restoring Ukraine's control over the border, without reinstating the law and the Constitution of Ukraine and displaced persons. In the diplomatic world, Steinmeier’s formula is understood as: elections first and then, as life shows. Whereas Ukraine's formula of Ukraine should be like this: for starters, demilitarisation, restoration of the border, the return of the law and the Constitution, Ukrainian control over this territory, and then the elections. That is the difference," she said.

On the sidelines, the main speakers of Servant of the People commented - each in their own way – on the formula, ruling out the surrender of Ukraine's interests. 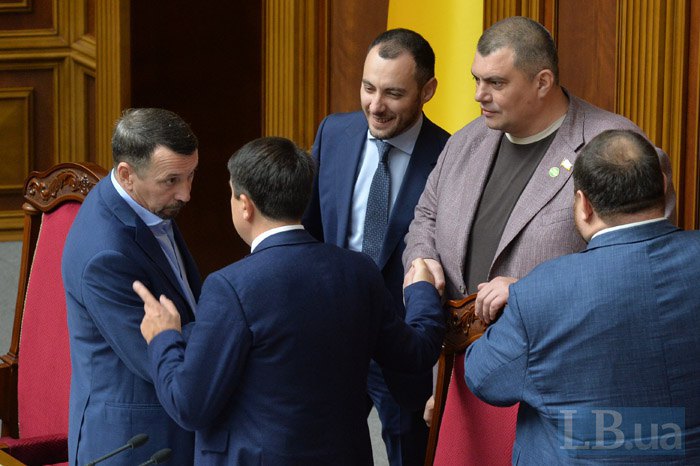 Bohdan Yaremenko, head of parliament's foreign affairs committee and Servant of the People MP, tried to reassure journalists for a long time that nothing was actually signed yesterday.

“At a meeting with the president today, I personally saw in his hands a copy of the letter, I emphasize the letter with proposals outlining that very Steinmeier's formula... But this document does not have the legal status, this is not an agreement, there is only a letter addressed to Sajdik," he said. 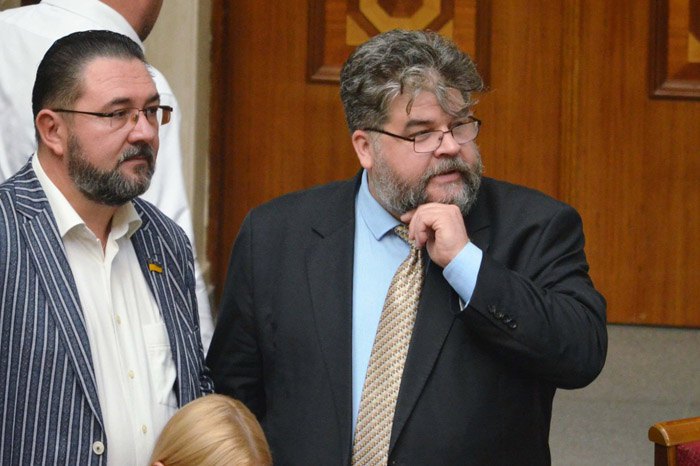 Yaremenko insisted that the president himself supported the holding of elections simultaneously all over Ukraine. And there is no question of introducing amendments to the Constitution of Ukraine which would register a special status of these territories.

"We will not put the cart before the horse. That is, to begin with, we will ensure security, withdraw troops, and only then will we hold elections... Therefore, it is too early to say anything about a specific election date in Donbas. It is also too early to speak about the preparation of a new version of the law on special status. To begin with, the prerequisites for security should be achieved, then a summit in the Normandy format should be held, where agreements should be concluded. Then we will sit down and think about how to formalise them best from the point of view of Ukrainian and international law," he promised. 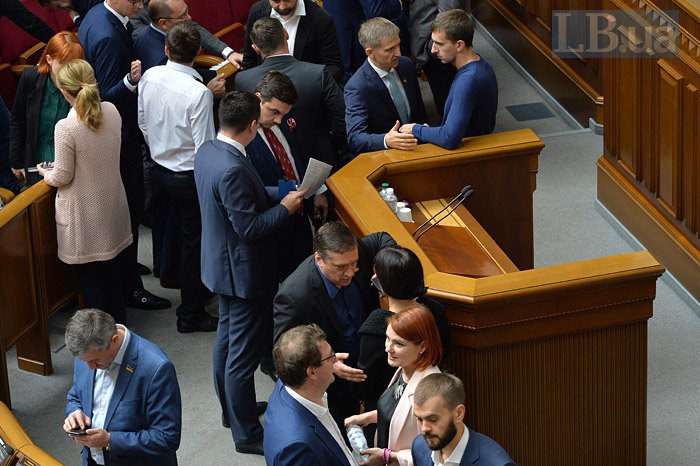 Observing the Servant of the People's hectic efforts, one of long-time MPs, now being in the opposition, remarked in a brief but apt manner: "They have their backs on fire."

"And all of this is due to the lack of communication along all verticals. One gets the impression that they have no idea about basic planning, let alone proactive work. And this is not just bad for the country. It is terrible," the MP said.