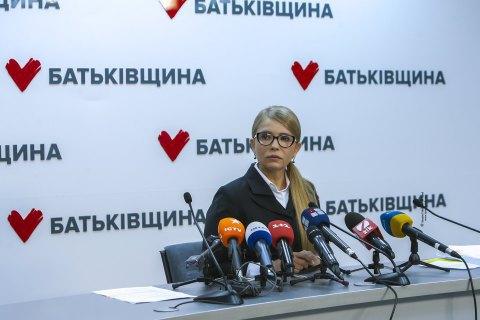 The so-called "Steinmeier's formula" will turn Donbas into something similar to Moldova's breakaway Dniester region, Fatherland faction leader Yuliya Tymoshenko has said in parliament, according to an LB.ua correspondent.

"If Steinmeier’s formula is passed, elections will be held at gunpoint and without the people of Ukraine, this means the Dniester region... This means that any next election of the president or parliament will mean 5.5 million falsified ballots and we will be a colony again," she said.

She added that today everyone comments on Steinmeier’s formula as they see fit but do not understand its essence.

"And it provides that elections to local authorities and their legalisation in the occupied territories will be held without the demilitarisation of Donbas and without restoring Ukraine's control over the border, without reinstating the law and the Constitution of Ukraine and displaced persons. In the diplomatic world, Steinmeier’s formula is understood as: elections first and then, as life shows. Whereas Ukraine's formula of Ukraine should be like this: for starters, demilitarisation, restoration of the border, the return of the law and the Constitution, Ukrainian control over this territory, and then the elections. That is the difference, "she said.

At the same time, Tymoshenko called on MPs to get busy with drafting agreements for the liberation of the occupied territories.

"We, as parliament, as a team, should stand near the president, rather even as a fortress in front of him. Here, in parliament we need to develop a Ukrainian formula for settling the war in the east and returning the territories to Ukraine," Tymoshenko said.

After "Steinmeier's formula" was reported to be agreed, the Voice party demanded an explanation from Zelenskyy while Fatherland called it a threat to the national security, territorial integrity and state sovereignty of Ukraine.