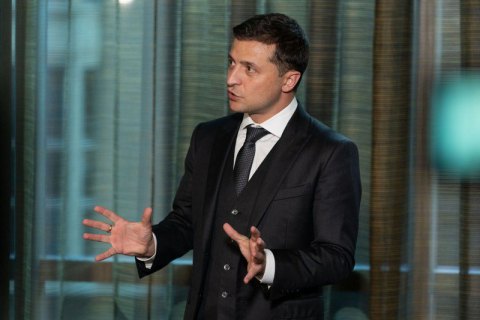 Ukrainian President Volodymyr Zelenskyy has explained the provisions of the so-called "Steinmeier's formula" describing the procedure for the implementation of the Minsk agreements on a Donbas settlement.

"I would like to separately touch upon the biggest scarecrow of the recent weeks, called 'Steinmeier's formula'. What does this formula mean? There is a sentence or two, that is it. This is a temporary law on the special procedure for local self-government in certain areas of Donetsk and Luhansk regions. The law on special status of Donbas is enacted on a permanent basis on condition that local elections are held there in accordance with the Constitution and legislation of Ukraine. And only after the OSCE publishes a report confirming that elections were held in accordance with its standards and the people's standards for democratic elections," he said at an urgent briefing.

He emphasized that for the election to be in line with Ukrainian legislation, "there can be no machine guns and the border must be ours" in Donbas.

The president promised that Ukraine would never agree to any election if there are "any troops" in Donbas.

"This means that there will be no elections at gunpoint and there can be none. The law on special status of Donbas is in effect until 31 December 2019. There will be a new law which parliament will develop in close cooperation with society. And none of the red lines will be crossed in this new law. Therefore there is no capitulation and there will be none," he added.