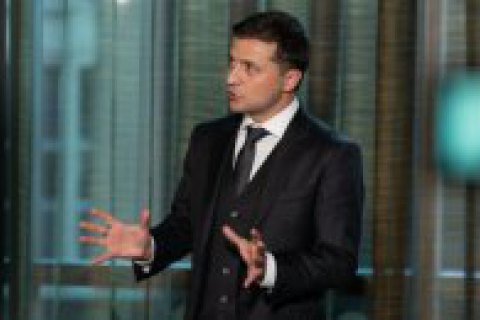 President Volodymyr Zelenskyy has recorded a video address to Ukrainians concerned about the risks posed by the so-called "Steinmeier's formula" for Donbas.

He urged them "not to fall for manipulations and provocations" and reassured them that he would never betray the country's interests.

The text of his video address was published on the president's website.

I may deeply upset someone now but there is no "betrayal" planned. I will explain why and I beg you to hear me.

Let's start with the most important thing. Do we want the war to end and all Ukrainian territories to return? Yes.

Today, there is a single platform where these issues can be discussed at the highest level. This is a meeting in the Normandy format.

Could it happen in the near future? No.

Why? Because there was one obstacle to this, the biggest horror story of recent weeks, the Steinmeier formula.

Let's see what the formula is.

Does it imply that Ukraine recognises the annexation of Crimea and renounces Donbas? No.

Does it imply that elections in Donbas will be held tomorrow and at gunpoint? No.

Why three years ago the previous president of Ukraine announced the beginning of efforts on the implementation of this formula?! Did he want to betray Ukraine?

This formula says only one thing: when the so-called law on special status of Donbas should come into force.

Namely, after local elections are held there under the Constitution of Ukraine, the legislation of Ukraine, and after the publication of an OSCE report that the elections were held in accordance with international democratic standards.

That's what Ukraine has agreed to in Minsk.

Have we signed any joint agreements with the so-called Donetsk and Luhansk people's republics? No.

We have sent a separate letter to Mr Sajdik to confirm that we had approved a position on the text of this formula.

What's next? Elections in Donbas tomorrow? No.

Next, there will be a meeting in the Normandy format together with the president of France, the chancellor of Germany and the president of the Russian Federation, where we will discuss ways to end the war in Donbas.

My position on this issue is clear and comprehensible, and it is in line with the position of all Ukrainians: we all understand that Donbas is Ukraine. And peace must reign there, firing should be stopped completely, and foreign paramilitary groups must be withdrawn.

We all understand that there should be Ukrainian border guards on the Ukrainian-Russian border.

An exchange of prisoners must take place for all our citizens to return home.

And elections should take place not at the gunpoint of machine guns but under Ukrainian law with the access of candidates from Ukrainian political forces, Ukrainian media and international observers, with the possibility of exercising their suffrage by all internally displaced persons.

We will discuss all of this at a meeting in the Normandy format.

Will a new special status law be signed there? No.

This law is effective until 31 December 2019. There will be a new law.

Will we develop it ourselves and pass it quickly? No.

We will write it together in cooperation and public discussion with the entire Ukrainian society. Without crossing any "red line".

So no surrender. No surrender of Ukraine's national interests. No backdeals or global steps without the consent of the people of Ukraine.

We have a long and difficult path ahead of us towards solving this problem.

And we have to take it together. And here we need unity.

I respect the constitutional right of every citizen of Ukraine to protest, I hear you, and believe me - I will never surrender Ukraine!

At the same time, I would really like to ask everyone to think carefully and calmly about the situation and not to be manipulated or provoked by some persons.

They are very eager to exploit you, to be able to rob you again, to become martyrs of political persecution and avoid criminal liability. This will not happen.

Everything will be Ukraine!