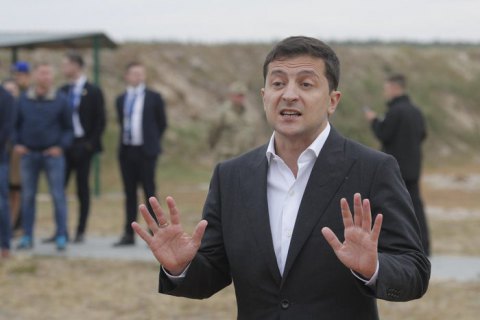 Ukrainian President Volodymyr Zelenskyy has denied being pushed by US President Donald Trump to investigate one of his rivals in the 2020 presidential election, Joe Biden, saying he lacks such authority under the Constitution.

"I was never pressured and there were no conditions being imposed" to realize a summit with Trump or agree to arms sales in return, Zelenskyy said Saturday in an interview with Kyodo News at his office in Kyiv.

Ukrainian prosecutors will deal with any requests from their US counterparts to cooperate in investigations "in accordance with our laws," if they are made based on "international law", Zelenskyy said.

The allegations, which first came to light in a whistleblower report, say that Trump, a Republican, abused his office by asking Zelenskyy in a July 25 phone call to investigate Biden, a former vice president and one of the Democrats' most prominent presidential candidates, and his son Hunter's business dealings in Ukraine.

While Trump has denied any wrongdoing, Democrats in the House of Representatives have initiated a formal impeachment inquiry.