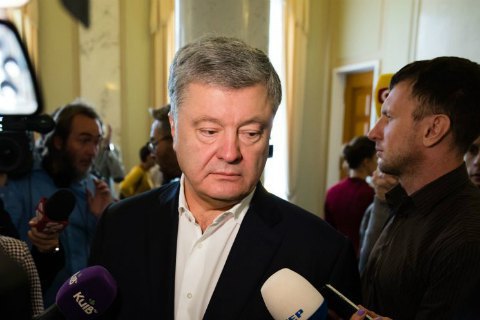 The State Investigation Bureau (SIB) has sent a draft suspicion notice for ex-President Petro Poroshenko to the Prosecutor-General's Office. He is a member of parliament and thus immune from prosecution.

According to the SIB website, the draft suspicion notice was drawn as part of a pre-trial investigation into the possible illegitimate wielding of influence on the selection of candidates for the High Justice Council in March-May 2019.

Poroshenko is suspected of crimes described by Article 109 Part 3 (actions aimed at seizing power) and Article 364 Part 2 (abuse of authority) of the Criminal Code of Ukraine.

SIB investigators sent to the PGO a draft motion asking parliament to allow Poroshenko to be tried under criminal law.

SIB head Roman Truba may lose his post in several weeks as the bureau is about to be relaunched.

The council consists of 21 members, 10 of whom are elected by judges and another 10 by the president of Ukraine, parliament, a congress of lawyers, a conference of prosecutors, representatives of law universities (two members each). The head of the Supreme Council is a member of the High Justice Council by default.