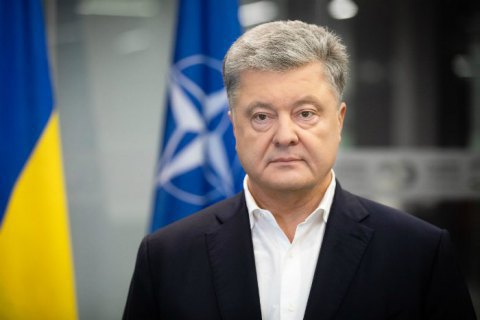 The draft suspicion notice for former Ukrainian President Petro Poroshenko, which the State Investigation Bureau sent to the Prosecutor-General's Office, is a Russian order aimed at discrediting Poroshenko ahead of the European People's Party summit in Croatia, his press service has said.

"The so-called 'suspicion' posted on Telegram by a deputy head of Yanukovych's administration, Portnov, and later copied by the SIB press service, is nothing else but a Russian order to damage the reputation of the fifth president and an attempt to prevent Petro Poroshenko from holding a number of meetings with foreign leaders at the summit of the European People's Party in Croatia and at the security forum in Halifax (Canada)," it said.

The press service described the draft suspicion notice as "the last trump card used by SIB director Roman Truba, clinging with all his might to a chair that is quickly escaping him".

"The pending dismissal of the SIB head is not the only reason for the rush demonstrated by Truba and his mentor Portnov. On 15 November, [Kyiv's] Shevchenkivskyy court ordered the SIB to consider a petition to close these particular proceedings. Truba's convulsions are just an attempt to evade the implementation of the court decision," the press service said.