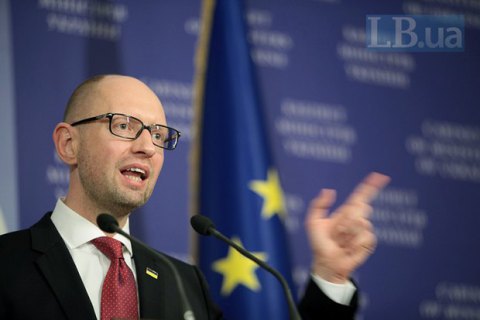 “The goal of Putin and his emissaries is not peace. Their goal is war against all of us. Moscow does not believe in tears. Moscow wants blood. But we will stop them this time too,” wrote Arseniy Yatsenyuk, Prime Minister of Ukraine in 2014-2016, the leader of People’s Front Political Party in his blog on Censor.net.

Arseniy Yatsenyuk notes that today, on the five-year anniversary of the MH17 tragedy, Medvedchuk presented Putin’s plan regarding Ukraine and Europe in Strasbourg.

The essence of the plan, Yatsenyuk wrote, is as follows: “everything falls on Ukraine”: “Victims, the crimes of Russian soldiers and militants, murder, rape, torture. Everything that has been destroyed or taken to Russia. Ukraine must pay for all of it”.

According to Putin’s plan presented by Medvedchuk, “Ukraine does not have and cannot have an independent future”: “Everything will be decided by Moscow. That is what the Kremlin wants. That is his version of history. There are no Ukrainians. Never were. Never should be”.

Meanwhile, Arseniy Yatsenyuk said, Crimea itself is being taken out of parenthesis: “Crimea, according to Moscow, belongs to Russia. There will be no alternative”.

Next, according to Putin’s plan, “Europe must pay Moscow over the support of the “reconciliation” ideology, plus the Nord Steam 2”: “You will always pay, Putin says”.

“Europe, keep doing what you’re doing, in essence is what Putin is telling European listeners. Invite Medvedchuks, allow Russian parliamentarians to join the Parliamentary Assembly of the Council of Europe, throw Ukrainians behind bars. And keep an eye on the news, soon we will come for your next territories — Poland, Hungary, the Baltic States”, - the leader of People’s Front party wrote.

“Europe, says Putin on the anniversary of #MH17, you will pay for everything, even for the collapse of the Soviet Union.

Because you are tired, Europe. You believe the time has come to catch your breath, clear the air, come to an agreement. Putin doesn’t think so. Welcome him in. He wants to dance on the graves of Europe’s hopes. That’s exactly what Medvedchuk said in Strasbourg today,” said Yatsenyuk.

And in addition, Arseniy Yatsenyuk noted, another piece of news came from Moscow: “Putin gave the order for a simplified regime of granting citizenship to his victims from the Donbas”.

The goal of Putin and his emissaries is not peace, Arseniy Yatsenyuk stated: “Their goal is war against all of us”.

“For five years, Medvedchuk has been secured as a no-alternatives mediator. This is it. Today he issued his bill”, the leader of People’s Front party wrote.

“Moscow does not believe in tears. Moscow wants blood. But we will stop them this time too”, said Arseniy Yatsenyuk.