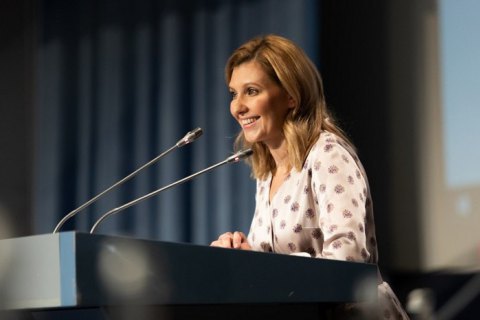 In an interview with Vogue, Ukraine's First Lady Olena Zelenska has outlined her first priorities.

The president’s wife noted that over the six months in her new role, she has studied what areas the first ladies around the world focus on.

"There are no bleak individuals among the presidents' wives, there is something to learn from each one. For example, Brigitte Macron is a teacher. Her programme focuses on education: she opens schools for adults who, for various reasons, were had to drop out of school. During our meeting, she mentioned that she is teaching them French and literature. Sarah Netanyahu, the wife of the Israeli prime minister, is a practicing child psychologist. Elke Buedenbender, the first lady of Germany, is a successful lawyer," Zelenska said.

She also noted that she would focus on specific tasks: children's health, equal opportunities for all Ukrainians and cultural diplomacy.

“One of them is school nutrition reform. The sooner you teach children to eat properly, the easier it is to explain later that broccoli is better than sausage... If children do not like school lunch, they visit a kiosk next door and buy what they like without thinking about its benefits or harm. Therefore, it is not surprising that the most common problems with children's health are gastrointestinal diseases," she said.

In the autumn, Olena's team held a round table with the relevant ministries, and next year the Health Ministry will present a new school catering programme.

The first lady’s programme also foresees support for Paralympians and the development of inclusive infrastructure in Ukrainian cities. Her team collaborates with the founder of the Paralympic movement in Ukraine, the president's envoy for the rights of persons with disabilities, Valeriy Sushkevych.

In 2020, Olena Zelenska plans to support the national team at the Summer Paralympic Games in Tokyo.

“If the first lady goes with the national team to the Paralympic Games and walks with them in a convoy, this is a sign both for society and for the leaders of other countries. It is very important for me that she has not ignored this topic, nor she has distanced herself. I am glad that Olena understands the connection between the successes of Ukrainian Paralympians in the world and public sentiments," Sushkevych said.

The first lady said that experts help her understand the key social problems and develop strategies for tackling them. In particular, the ambassador of the United Nations Population Fund in Ukraine, TV presenter Masha Efrosinina, briefed her on the fight against domestic violence . She noted that every year 1 million Ukrainian women suffer from domestic violence, and their children suffer along with them.

In August, the editor of the UkraineAlert section at the Atlantic Council, Melinda Haring, sent an open letter to Olena Zelenska, in which she asked her to influence her husband on the issues that are relevant to the country, in particular, the issue of protecting the rights of journalists and public activists. In particular, Haring asked Zelenska to help the president and "do more than her predecessors".

The wife of the fifth president of Ukraine, Maryna Poroshenko, also dealt with issues of inclusive education.