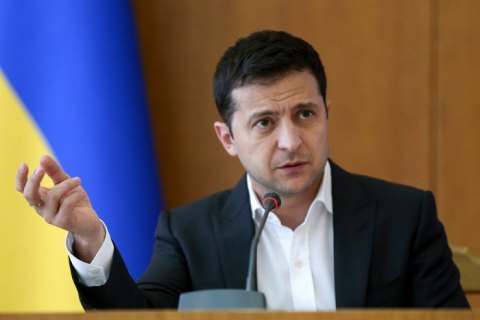 Ukrainian President Volodymyr Zelenskyy has said that it is necessary to fight for those residents of separatist areas in Donetsk and Luhansk regions who feel disappointed because of the 2014 events. In the meantime, pro-Russian residents are free to decide and go where they want to live.

"A survey was published which said that the majority of people want to live in Russia. This is not true. I believe and I know that there are people who stand for Ukraine. There are 'lost' people too. And, finally, there are those who are for Russia. Those who favour Russia may leave, Russia currently issues illegal Russian passports. Every person has the right to choose where one wants to live," Interfax-Ukraine has quoted him as saying, citing Der Spiegel, Le Monde, Time and Gazeta Wyborcza.

The president said that he considers it wrong and unfair if someone in Ukraine says that he is a resident of Russia and it is "his land".

"As for those who got 'lost': if someone has a Ukrainian passport and then, in addition to it, receives a Russian passport, gets social support here and there, this person is lost. I have no moral right to say 'Pooh'. We need to bring these people back, to fight for them. But I would not fight for people who consider themselves Russians only," he said.