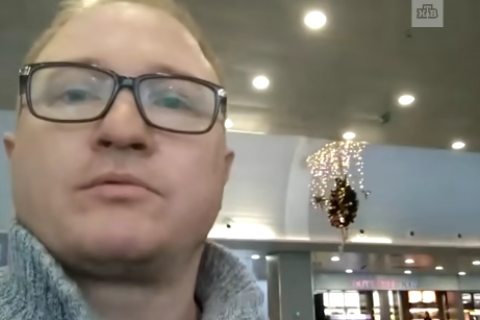 Border guards have barred a filming crew of the Russian NTV TV channel from entering Ukraine.

"Recently, Zelenskyy suggested that Russian media should come to Kyiv and see with their own eyes what is happening in Ukraine. Our correspondent Serhiy Savin took this invitation for granted, flew to Kyiv… and was not let in," the TV channel said in a statement.

Savin posted a video in which he says that he arrived in Kyiv on the morning of 13 December and went to border control.

"We said at once who we are, why we came to Ukraine and for how long, and what we are going to do," he said.

In his words, the NTV crew was planning to make a report on the investigation into journalist Pavlo Sheremet's murder, gas talks between Ukraine and Russia and "an exchange of prisoners which President Zelenskyy promised [to hold] by the end of the year and on a possible ceasefire on the line of contact".

After a conversation, Savin received his documents back. He said everything was done in a "polite and diplomatic" manner.

He was then served with a resolution that he cannot enter Ukraine because he "failed to prove the stated purpose of his planned stay here".

Yesterday, journalists of the Russian propaganda TV channel Zvezda boasted a report from Kyiv's Independence Square. However, it turned out that they crossed the border as regular travelers, not as journalists.