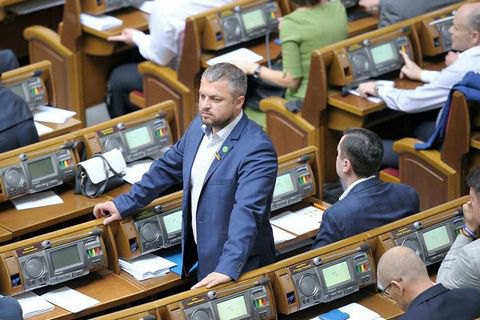 Propresidential Servant of the People MP Andriy Bohdanets ended up in a hospital with suspected concussion after a fight with former members of the far-right Freedom party, Eduard Leonov and Ihor Miroshnychenko.

Servant of the People spokeswoman Yevheniya Kravchuk said that this happened as a result of the "bold attack by a group of people" during a meeting of the parliamentary committee on agrarian policy. The propresidential faction called on law-enforcement agencies to deal with the incident.

It also accused representatives of pro-Russian parties and nationalists of "joining efforts" to disrupt the work of the committee. Kravchuk suggested that it would be reasonable for the committee to change the venue and move to a better protected place.

Later in the day, the Kyiv prosecutor's office opened a case over the attack on Bohdanets, its press secretary Nadiya Maksymets told Ukrainian News.

The case was opened over a threat or violence against a state or public servant (Article 346 Part 2 of the Criminal Code).