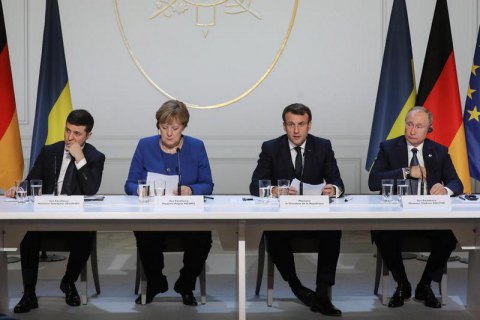 The Minsk agreements (Minsk Protocol of September 5, 2014, Minsk Memorandum of September 19, 2014 and Minsk Set of Measures of February 12, 2015) continue to serve as the basis of the Normandy format, the Member States of which are committed to their full implementation.

They underscore a common commitment to a sustainable and inclusive architecture of trust and security in Europe, based on the OSCE principles, for which resolving the conflict in Ukraine is one of a series of important steps.

1. Immediate measures to stabilize the situation in the conflict zone:

They support the development and implementation of an updated mine clearance plan based on the decision on mine clearance of the Trilateral Contact Group of March 3, 2016.

They support the arrangement within the Trilateral Contact Group on three additional disengagement areas for the deployment of assets by the end of March 2020.

They encourage the Trilateral Contact Group to promote the release and exchange of detained persons associated with the conflict by the end of the year on an "all for all" basis, starting with "all identified for all identified", with the understanding that international organizations, including the International Committee of the Red Cross (ICRC), will be granted full and unconditional access to all detained persons.

They support the achievement of agreement within the Trilateral Contact Group on new delimitation border crossing points, based primarily on humanitarian criteria, within 30 days.

They recall that the Special Monitoring Mission (SMM) of the Organization for Security and Co-operation in Europe should be able to use all the capabilities of the mandate (as of March 21, 2014) and have a safe and secure access throughout Ukraine for the full implementation of its mandate.

2. Measures to implement the political provisions of the Minsk agreements:

The parties express their interest in reaching agreements within the Normandy format (H4) and the Trilateral Contact Group on all legal aspects of the Law on the special order of local self-government (on the special status) of certain districts of the Donetsk and Luhansk regions - as specified in the Comprehensive Set of Measures for the Implementation of the Minsk agreements of 2015 - to ensure its continued operation.

They consider it necessary to incorporate the “Steinmeier formula” into Ukrainian law according to the version agreed by H4 and the Trilateral Contact Group.

They ask their foreign ministers and political advisers to ensure that the agreements reached are implemented, and they have agreed to hold another meeting in this format within four months as regards political and security conditions, inter alia, to organize local elections.