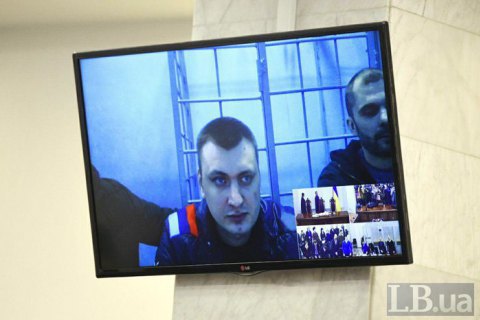 The Kyiv court of appeal has released Oleh Yanishevskyy, Serhiy Zinchenko and Pavlo Abroskin from custody on personal recognizance. Serhiy Tamtura and Oleksandr Marynchenko were released from house arrest, an LB.ua correspondent has reported.

All five are members of the now disbanded Berkut riot police accused of killing 49 activists of the Euromaydan pro-EU, antigovernment protests (known as Heavenly Hundred) on 18-20 February 2014.

At the beginning of the 28 December, four prosecutors were expelled from the group investigating the killings of the Heavenly Hundred and replaced with a new group as the court was hearing the appeal of the defence.

One of the new prosecutors said that they would not mind if the court released the Berkut officers, citing Prosecutor-General Ruslan Ryaboshapka's letter saying that they were included in the list of prisoners Ukraine is planning to swap with the self-proclaimed republics in Donbas on 29 December.

Lawyer Yevheniya Zakrevska said that the inclusion of persons not involved in the military conflict in the exchange list only extends the area of this conflict. In her opinion, it is Russia's interference in Ukraine's domestic affairs.

Zinchenko, Abroskin and their commander Dmytro Sadovnyk were arrested in March-April 2014. Sadovnyk later escaped from a house arrest.

Tamtura, Marynchenko and Yanishevskyy were arrested in 2015.

This is the most important and advanced case of all the Maydan cases. It involves over 200 victims.