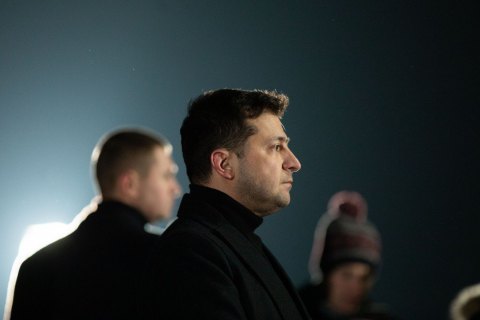 Ukrainian President Volodymyr Zelensky has cut short his visit to Oman over the deadly air crash of a Ukrainian passenger plan in Iran, his office has reported on Facebook.

"Ukrainian President Volodymyr Zelensky has urgently cut short his visit to Oman over the catastrophe of a UIA [Ukraine International Airlines] plane in Tehran and is returning to Kyiv," it said.

According to the National Security and Defence Council of Ukraine, 168 passengers and nine crew registered for the UIA Tehran-Kyiv flight which crashed down shortly after takeoff from Imam Khomeini International Airport in Tehran on 8 January.

Ukraine has set up a crisis group to investigate the crash of the Ukraine International Airlines (UIA) Boeing in Iran on 8 January, Prime Minister Oleksiy Honcharuk has said on Facebook.

"A terrible tragedy in Tehran. The UIA aircraft crashed this morning. Efforts to identify the causes of the tragedy have already been arranged. The Ukrainian consul is working at the site. An operative crisis group has been set up," he said.

The deputy director of the consular department at the Ukrainian Foreign Ministry, Vasyl Kyrylych, earlier said that "according to information which is being specified, the passengers on the flight and the crew died".