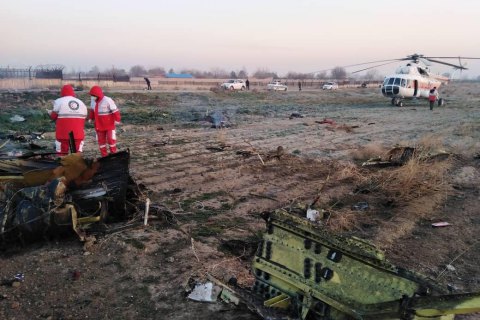 Eleven Ukrainian were onboard the Ukraine International Airlines (UIA) PS 752 flight from Tehran to Kyiv which crashed in Iran this morning, the National Security and Defence Council of Ukraine has said on Facebook.

"According to the latest information, there were two Ukrainian nationals and nine crew members, also citizens of Ukraine, onboard the Boeing 737 flight PS 752 by Ukraine International Airlines which crashed after takeoff from Imam Khomeini International Airport in Tehran," it said.

Speaking at a briefing at Kyiv Boryspil airport, UIA's senior management ruled out an error by the highly experienced flight crew.

"We do not suppose there was one," its operations director Ihor Sosnovskyy said.

He specified there were three members of the flight crew and six of the cabin crew onboard.

The company's technical director Oleksandr Shafiyev said that the aircraft was made in 2016 and bought directly from Boeing. He added that it was last checked on 6 January 2020 and found to be in full working order.

UIA has decided to suspend all flights to Iran indefinitely as of today.

Earlier, President Volodymyr Zelensky said that Ukraine was ready to send planes to Iran to pick up the bodies. A special crisis team has been set up to probe the crash.