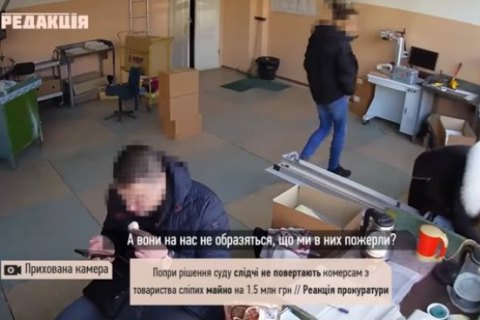 In Odesa, police have searched the office of a company employing blind people and stole some of their belongings, according to the regional police website.

Surveillance footage was leaked online and prompted criticism from commentators.

On the video, several people can be seen putting things in pockets and in a bag and arguing.

"Oh, I need some tape. Well, what else do I need? I already have a kettle and a speaker," a police officer says as he puts a tape roll in his bag. In the meantime, his colleague is commenting on a cookie which he found in the office and is eating. After all, they spotted a camera and turned it off.

The officers were identified and suspended by their superiors.

An internal investigation has been launched. Its files will be handed over to the State Investigation Bureau.

"This shameful act discredits the honour and dignity of those police officers who protect law and order on a daily basis, sometimes risking their lives. The police command wants people who serve in law enforcement to set an example of honour and dignity and does not plans to cover up the shameful actions of these employees," the police statement reads.