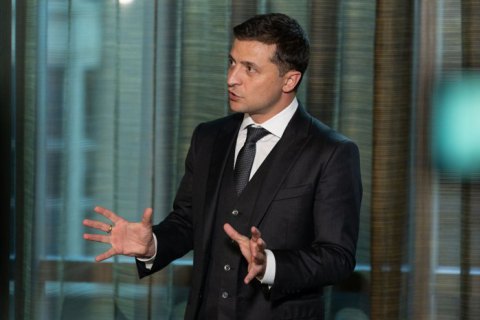 President Volodymyr Zelenskyy's office has commented on a report by the Skhemy investigative project about his trip to Oman and threatened with law action.

"The Ukrainian presidential office asserts that the information presented in Skhemy's report about a meeting between the president of Ukraine and a high-ranking official from the Russian Federation, which allegedly took place in Oman, is absolutely untrue," it said.

It continued: "The Ukrainian presidential office considers the publication of conclusions based not on facts or testimony but on speculation and information from some secret "sources", which is the case in the Skhemy show, as an open manipulation of public opinion. When such manipulation is done on social networks by anonymous accounts within the framework of the aggressor's information activities against Ukraine, this can still be explained by the logic of the hybrid war. But when Ukrainian journalists do the same, it goes beyond the vision of free journalism as such."

The Ukrainian presidential office expects the Skhemy programme "to deny false statements and assumptions made on their basis".

"We are filing a lawsuit in which we will demand a denial and an apology. We also consider it our duty to draw the attention of the public broadcaster UA:First to the fact that the information which is untrue and is an outright manipulation of public consciousness was disseminated on the air," it concluded.

On 13 February, Skhemy suggested that in order to urgently return to Kyiv after the downing of a Ukrainian passenger aircraft in Iran, Zelenskyy used the charter plane which had brought the secretary of the Russian Security Council, Nikolai Patrushev, from Moscow to Oman earlier in the day.

"The president of Ukraine has never met (in person or in the framework of international events), talked to or otherwise communicated with Nikolai Patrushev," the presidential office said.