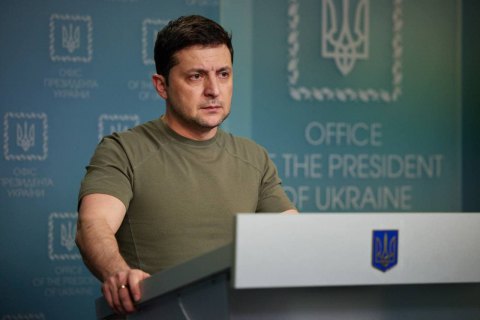 President Volodymyr Zelenskyy called the decision of the NATO summit not to close the sky over Ukraine "self-hypnosis" and a wrong narrative of the Alliance.

"Unfortunately, today seems the time to remind something else – guarantees and promises of security. Determination of alliances. Values that for someone appear to have died. Today was the NATO summit. Weak summit. Confused summit. The summit indicated that not everyone considers the struggle for freedom is to be the number one goal for Europe," Zelenskyy said.

The President stressed that all NATO intelligence agencies are well aware of the enemy's plans. They also confirmed that Russia wants to continue the offensive.

"Knowing that new strikes and casualties are imminent, NATO has deliberately decided not to close the sky over Ukraine. We believe that NATO countries have created a narrative that closing the sky over Ukraine will provoke Russian aggression against NATO. It is self-hypnosis. Those who are weak. Insecure. Internally. Although, can have weapons many times stronger than we have. You had to think about people. About humanity. And what were you thinking about at that summit?" Zelenskyy said.

"All the people who will die from now will also die because of you. Because of your weakness. Because of your disunity. The only thing that the Alliance has managed to do so far is to push through its procurement system 50 tons of diesel for Ukraine. Probably in order that we can burn the Budapest Memorandum. To burn better. But it has already burned for us. In the fire of Russian troops," the Ukrainian President added.

Zelenskyy stressed that the Alliance decision not to cover the sky over Ukraine gave the green light for further bombing Ukrainian cities and villages.

At the same time, the President thanked our country's friends in NATO. Those who help Ukraine despite everything. From the first day of the invasion and, as the President sure, to victory. That is why we do not feel alone.

"We continue fighting. We will defend our state. We will liberate our land. Thanks to our heroes," Zelenskyy said.

It was earlier reported that today the Chairman of The Verkhovna Rada of Ukraine addressed the governments and parliaments of the world to close the sky over Ukraine immediately. Earlier, similar closures were voiced by the President of Ukraine and the Minister of Foreign Affairs.

However, NATO rejected Ukraine's request to establish a no-fly zone. This was stated by Jens Stoltenberg, the Secretary-General of the Alliance, at a press conference after a meeting of foreign ministers of the Alliance.