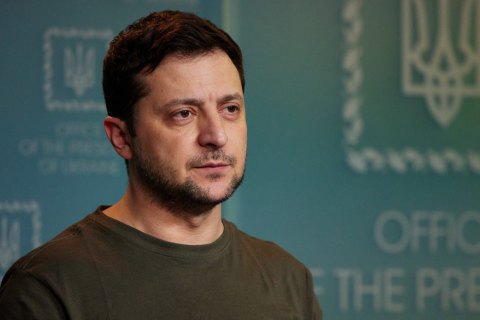 President Volodymyr Zelenskyy addressed the citizens of Ukraine who survived the ninth day of the military invasion of the Russian Federation.

“Great people of a great country, country of power, country of freedom. You are people of absolute moral leadership. We have endured nine days of darkness, nine days of evil. This is three times more than "darkness" and "evil" that were expected. We responded to the invasion as best as we could in times of greatest danger. We responded with heroism, solidarity, and mutual assistance. We answered in our way, in the Ukrainian way, " the president said.

Zelensky stressed that the history of Europe will remember this forever - he will talk about it to children, show it to grandchildren.

"The whole continent will know about Kharkiv, Chernihiv, Sumy, Volnovakha, Mariupol, Mykolayiv and many other cities of ours. Strategically, everything is clear: Ukrainians are united from Uzhhorod to Kharkiv, from Kyiv to Kherson. Ukrainians are chasing the enemy near Kyiv. They are beating the enemy for Okhtyrka, punishing for Gostomel, taking revenge for our Kherson, the Ukrainian Kherson, which they tried to humiliate today. But it didn't work out ... ", - the president said.

"Ukrainians have shown themselves - they didn't let themselves be played in a cheap cynical show with a pittance instead of help, with propaganda instead of sincerity. Russian propagandists thought of our people as themselves. And they saw that Kherson residents are proud and respect themselves, respect Ukraine ... I understand what a difficult decision it is when in the occupation one goes against armed enemies. I feel how risky it is, but I see how our people refuse to play by the rules of the occupiers, " Zelensky stressed.

The President noted that our citizens remain to be Ukrainians, remain with our state, even when they are temporarily in the dark.

"If Russian politicians still have eyes, they can see what Ukraine is, what our freedom is. The occupiers thought they could disconnect Ukrainians from television, disconnect our communications, seize food, cut off electricity, and heat. They thought that it would force Ukrainians to submit ... But even if you deprive us of oxygen, we will seize the air, to say: get out of our land! Even in complete darkness we see the truth. And we will fight until it darkens in our eyes ", said Zelensky.

"It is the 9th day of the war. Many of us remember on the 9th day recall those who are not with us anymore. Unfortunately, the memory of everyone who died for Ukraine is eternal!" the President added.

As a reminder, the ninth day of Ukraine’s heroic confrontation with the Russian military invasion is underway. The main efforts of the occupiers are to surround Kyiv and weaken the resistance in settlements close to the capital. Earlier, the General Staff of the Armed Forces announced five changes in enemy tactics.

Anyone who is ready and able to hold a weapon in their hands can join the territorial defense. Information about the addresses of brigades and battalions of the Terrorist Defense are on the website https://sprotyv.in.ua. Also the head of National police Igor Klimenko gave the order to heads of the main departments in areas to give out the weapon to veterans of the Internal Affairs authorities.

Ukrainians can donate blood in hospitals for wounded soldiers.

The recipe for a Molotov cocktail from the Ministry of Internal Affairs used for enemy vehicles can be found at the link. Chatbot to report on road markings left by the occupiers is here, and here it is about RSG and enemy equipment.