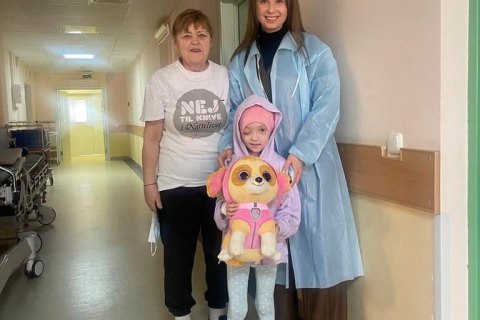 The grandmother and her five-year-old granddaughter, who were deported to Belarus by the Russian occupiers, were sent abroad for treatment. This was announced by the Minister of Foreign Affairs Dmytro Kuleba.

Our consuls found them. The child was operated on in one of the Belarusian hospitals. Due to the loss of her parents, an employee of the consular department of the embassy Mariana Botsvynyuk, issued temporary guardianship and an identification card to return the family to Ukraine. Today the girl was released from the hospital. The embassy rented an ambulance that drove the grandmother and granddaughter abroad, where the girl is currently continuing her treatment. The child's condition is stable, there is no threat to life, "Kuleba wrote.

On 28 February, a family from the Kyiv region tried to leave the war zone. Their car came under fire from the occupiers. A mother, father and 18-year-old son died immediately. A grandmother and five-year-old granddaughter survived. The girl had a bullet wound to the head. The Russians took them to Belarus, where doctors helped the family.

Dmytro Kuleba thanked the Ukrainian consuls who helped find the family, as well as the Belarusian doctors who saved the girl's life.

The Ministry of Foreign Affairs of Belarus does not mention the reasons for the death of Belarusian truckers in Ukraine. Two Belarusian citizens died on 10 March in Korosten, Zhytomyr Region, as a result of an airstrike by the Russian army.