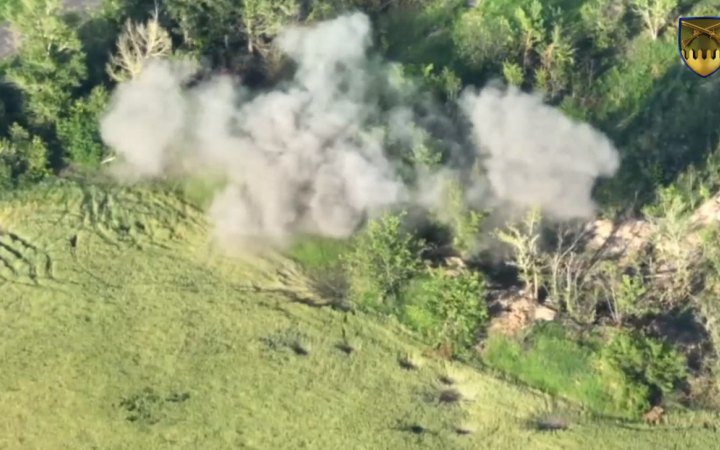 The General Staff of the Armed Forces of Ukraine announced that Ukrainian defenders had repelled several enemy assaults.

Our fighters successfully repulsed an enemy assault in the Slovyansk direction near the settlement of Bogorodichne, prevented russians' attempts to storm in the Severodonetsk direction, and fired on enemy sabotage and reconnaissance group in the Bakhmut direction. The group retreated, then the rushists (russian + fascist - translator's note) attempted an assault but were unsuccessful. About the operational situation in other areas - in our news.

The occupiers fired on ten settlements in the Donetsk region with the S-300 missile system; there are dead and wounded, according to the National Police of Ukraine. A hospital, 12 residential buildings, a penal colony and garages were destroyed.

According to the head of the Luhansk Regional Military Administration, Serhiy Haidai, the fighting in Severodonetsk continues in the industrial zone. Ukrainian troops control only the territory of the Azot plant.

The situation along the entire front line in the Luhansk region is challenging. "We note that the orcs are launching a large-scale offensive in our region; they have accumulated a sufficient number of reserves and today, all the free settlements of the region are on fire," Gaidai added.

"In a powerless rage at the success of our troops, the racists poundered Ochakov, the mouth of the Danube, the Belgorod-Dniester district of the Odesa region and Odesa itself," said in a statement the Task Force South.

Agricultural areas in the region and in the suburbs of Ochakovo were damaged, and a logistics food warehouse in Odesa was burnt down due to a missile strike.

The russian federation struck with mortars, artillery, and used drones in the Sumy region. There are dead and wounded.

According to the adviser to the head of the Kherson military administration, Serhiy Khlan, the Armed Forces of Ukraine pushed the occupiers back from the first line of defense, even though the enemy believed it was immutable. Now the invaders are fortified on the second and third lines.

Serhiy Khlan also added that in the last two weeks, the Armed Forces had an advantage over the enemy in the Kherson region.

Twenty-three killed occupiers, half a hundred wounded and destroyed equipment are the results of an unsuccessful Russian attack in the Kharkiv region, according to the Facebook page 92th Separate Mothorized Brigade named after Kosh Ataman Ivan Sirko.

"As a result of the joint work of fighters of the 92nd Brigade, 40 Brigade and 125th Territorial Defense Battalion, on June 19, 23 orcs were killed, and more than 50 were wounded," the fighters said. About the loss of enemy equipment - in the news.

At its session on June 20, the Verkhovna Rada of Ukraine adopted the Law on Ratification of the Council of Europe Convention on Preventing and Combating Violence against Women and Domestic Violence.

The demand to ratify the Istanbul Convention has been voiced in private by some EU member states as a precondition for approving Ukraine's status as a candidate for EU membership.

Ukraine signed the Istanbul Convention in 2011 but has not ratified it due to protests by churches and some politicians against its use of the term "gender."

According to LB sources in the Servant of the People party, discussions on adopting the law continued on the eve of the vote. About what - in our news.

"Ukraine must be a participant in the Three Seas Initiative. It is wrong that our state remained outside this initiative. One glance at our country's geographical map shows that only with Ukraine can the countries live up to their economic and infrastructural potential, the potential of social ties between our countries, people and the historical foundations of life in our region," said the President.

Ukraine has clearly articulated its vision of security design and is consulting with countries that could potentially act as guarantors of security, stated in an interview with LB.ua the head of the President's Office, Andriy Yermak.

"We understand that we do not have much time, we need to act quickly. That is why we created an expert group with Rasmussen was created, so that the solutions come not only from us, but from the expert community, and are based on the international best practices," said Yermak.

In an interview with our newspaper, the head of the President's Office also stressed that Ukraine is against lifting sanctions on russia in exchange for unblocking Ukrainian ports for grain exports.

"We are against the lifting of any sanctions. In addition, today, we have practically resolved the issue of Belarus in this sense (the self-proclaimed government of this country offered its railway infrastructure for the transportation of Ukrainian grain - ed.)" said Yermak.

Deputy Prime Minister for the Reintegration of the Temporarily Occupied Territories, Iryna Vereshchuk, said that russia had forcibly deported 1,200,000 Ukrainian citizens to its territory.

On June 19, the Verkhovna Rada condemned the actions of the russian federation concerning the kidnapping and compulsory removal of Ukrainian children to the territory of the aggressor state.

From June 13 to 19, the Ukrainian IT army attacked more than 400 Russian online resources.

The Ministry of Digital Transformation reports that Ukrainian experts attacked the accreditation base of the economic forum at which Russian President Putin was to speak, so the speech of the Russian dictator was postponed for an hour. This spoiled the meeting of the aggressor president with military correspondents and reduced the amount of propaganda he broadcast.

Russia's regional courts have also been attacked. The information stored on their resources remains inaccessible for several weeks due to constant cyberattacks.

What other sites were hacked by Ukrainian experts - in our news.

The trial at the request of the Ministry of Justice lasted about six hours. This is the longest trial concerning the banning of parties.

Teachers at the Kyiv Conservatory have opposed the leadership's decision to keep Pyotr Tchaikovsky's name in the title of the institution. They are demanding a new vote with an expanded membership.

The Ministry of Culture, in turn, stated that the entire staff should decide on Tchaikovsky's name at the institute.

That is, the vote of the Academic Council is not a reason to keep or change the name.