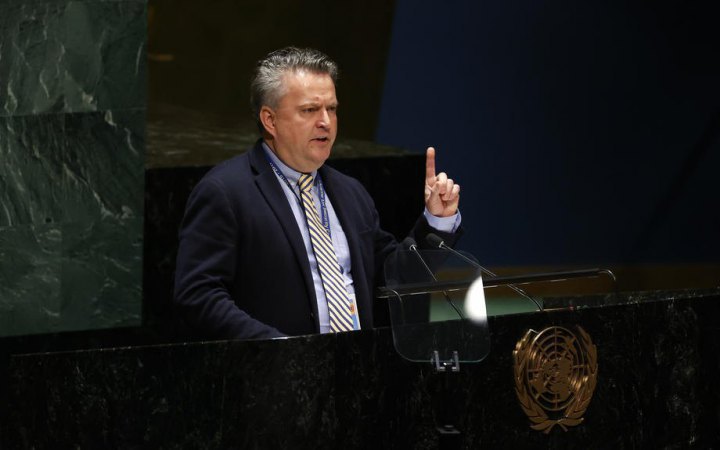 Permanent Representative of Ukraine to the UN, Sergiy Kyslytsya, at a meeting of the UN Security Council, spoke about the need to finish off russian fascism, reports European Pravda.

"Russia's conversion to an aggressive fascist regime has already been demonstrated in its inability to refrain from attacking those whom it considers to be weak prey. It must be stopped by us all, the sooner the better. Ukraine, now on the frontline, has the necessary will of its leadership, resoluteness and bravery of its army and people as well as unprecedented international solidarity," Kyslytsya said.

He stressed that "if we let putin or his successor on the Kremlin throne regrow their chopped back claws soaked in the blood of Ukrainians, the next war is imminent."

Kyslytsya emphasized that in this case, "the civilized world will pay three times the price of what is being paid today."

Kyslytsya also recalled that there was no historic vote on accepting russia to take the place of the Soviet Union in the UN.

"The event that took place in this chamber in December 1991 triggered the sequence of tragic events to follow. Just imagine, on the last day before Christmas Eve the Security Council President, Soviet Ambassador Vorontsov adjourns the Council’s meeting. The next Council meeting is opened by the very same person – and lo and behold! - as a representative of another country – the Russian Federation. A country at that moment absent from the UN Charter and from the list of the UN membership in general," said Kyslytsya.

"There was no vote in the Security Council. There was no vote in the General Assembly. There was no formal decision of any body, and not because of the Christmas break. President Yeltsin just notified the UN of his decision and someone accepted this decision for execution with no public debate or vote. Yet Ambassador Vorontsov managed to convince the Secretary General to accept his credentials under a Christmas tree as a representative of russia," added the Ukrainian permanent representative.

On June 21, the UN Security Council considered the issue of incitement to violence as one of the causes of russia's aggression against Ukraine.