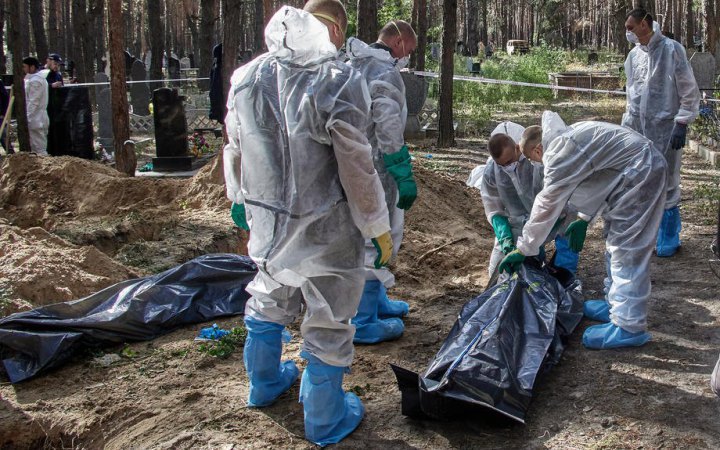 On the last day of the exhumation, experts recovered more than 20 bodies from the mass grave in Izyum, Kharkiv Region.

In total, according to preliminary estimates, 447 people were buried in the forest, said the head of the Kharkiv regional military administration, Oleh Synehubov, at a briefing at the exhumation site.

Some graves were empty and some had two or four people buried in them.

Most of the buried, according to Synehubov, are women, six are children.

The exact number of those who died of violent death is unknown, but at least 30 people were tortured, he said.

"Upon examination, it was found that they were tortured, as the limbs were broken. Some of the corpses had their hands tied behind their backs, there were ropes around the necks. According to preliminary examinations by our experts, we can establish that the deaths were violent. We also found several bodies with amputated genitals, which indicates torture," Synehubov said.

The mass burial site in Izyum was found on 15 September. The next day, the exhumation of the bodies began, which lasted eight days. About 200 people worked there every day - forensic experts, police, rescuers, prosecutors. A a mobile laboratory worked at the exhumation site, where relatives of the deceased took DNA tests. According to preliminary data, more than a hundred people have already taken tests.