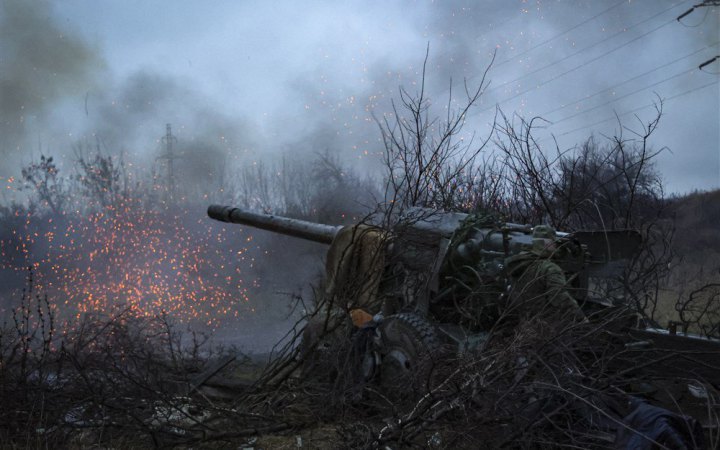 The 275th day of the Russian large-scale invasion has begun. Over the past day, the units of the Ukrainian Defence Forces repelled the attacks of the occupiers near the settlements of Stelmakhivka and Dibrova in Luhansk Region and Bilohorivka, Yakovlivka, Bakhmutske, Bakhmut, Opytne, Pervomayske, Krasnohorivka, Maryinka and Novomykhaylivka in Donetsk Region, according to the morning report of the General Staff of the Armed Forces of Ukraine.

At the same time, the enemy carried out 6 missile and 14 air strikes, carried out 59 MLRS attacks on the positions of our troops and populated areas.

In the Siversk area, the occupiers shelled the Vovkivka settlement of Sumy Region with barrel artillery.

In the Slobozhansk area, the enemy fired artillery of various types in the vicinity of Strilecha, Krasne, Zelene, Starytsa, Ohirtseve, Vovchansk, and Dvorichna of Kharkiv Region. An attack UAV was deployed near Zelene.

The enemy is defending in the Kupyansk and Lyman areas. Areas of the settlements of Berestove, Kharkiv Region, were damaged by fire; Makiyivka, Novoselivske, Stelmakhivka and Ploshchanka in Luhansk Region and Torske, Donetsk Region. In the Novoselyvske area, the occupiers used an unmanned aerial vehicle.

In the Bakhmut and Avdiyivka areas, the enemy is concentrating its main efforts on conducting offensive operations. Areas of Andriyivka, Verkhnyokamyanske, Bakhmut, Bakhmutske, Avdiyivka, Krasnohorivka, Maryinka, Nevelske and Pervomayske settlements of Donetsk Region were subjected to shelling from tanks and artillery of various calibers.

The enemy continues to defend itself in the Novopavlivsk and Zaporizhzhya areas. Fired from tanks, mortars, barrel and rocket artillery at the positions of the Defence Forces and areas of the settlements of Vuhledar, Prechystivka, Neskuchne, Vremivka, Zelene Pole of Donetsk Region and Olhivske, Hulyaypilske and Charivne in Zaporizhzhya Region. Russian occupiers launched an air strike in the Vuhledar area.

In the Kryvyy Rih and Kherson areas, the enemy does not stop artillery shelling of the positions of our troops and settlements on the right bank of the Dnipro river. It used tanks, mortars, barrel and jet artillery to shell the settlements of Antonivka, Zmiyivka, Beryslav, Tokarivka, Mykilske, Chornobayivka, Bilozerka and Veletenske of Kherson Region and the city of Kherson.

On 23 November, it was confirmed that the units of the Defence Forces fired at the areas of the enemy’s manpower and military equipment concentration in the village of Zelenyy Yar, Zaporizhzhya Region. The enemy lost 2 trucks, over 15 wounded and 20 dead servicemen.

In the village of Mostove, Zaporizhzhya Region, the Russian occupiers are forcing the local population to redraw real estate and land documents under the legislation of the Russian Federation. In case of refusal, they threaten to "nationalise", that is, simply take away this real estate.

Ukrainian aviation continues to destroy the invaders. During the past 24 hours, 12 strikes were carried out on areas where the enemy's personnel, weapons and military equipment are concentrated and on 2 positions of its anti-aircraft missile systems.

At the same time, units of missile troops and artillery of the Defence Forces hit 4 control points, 2 areas of concentration of personnel and armament and military technic, a station for unloading weapons and military equipment, an ammunition depot and an enemy relay station.