In the early hours of 7 January, two white clerical headgear pieces (klobuks) were found on the grave of His Beatitude Volodymyr.

Here is a photo. 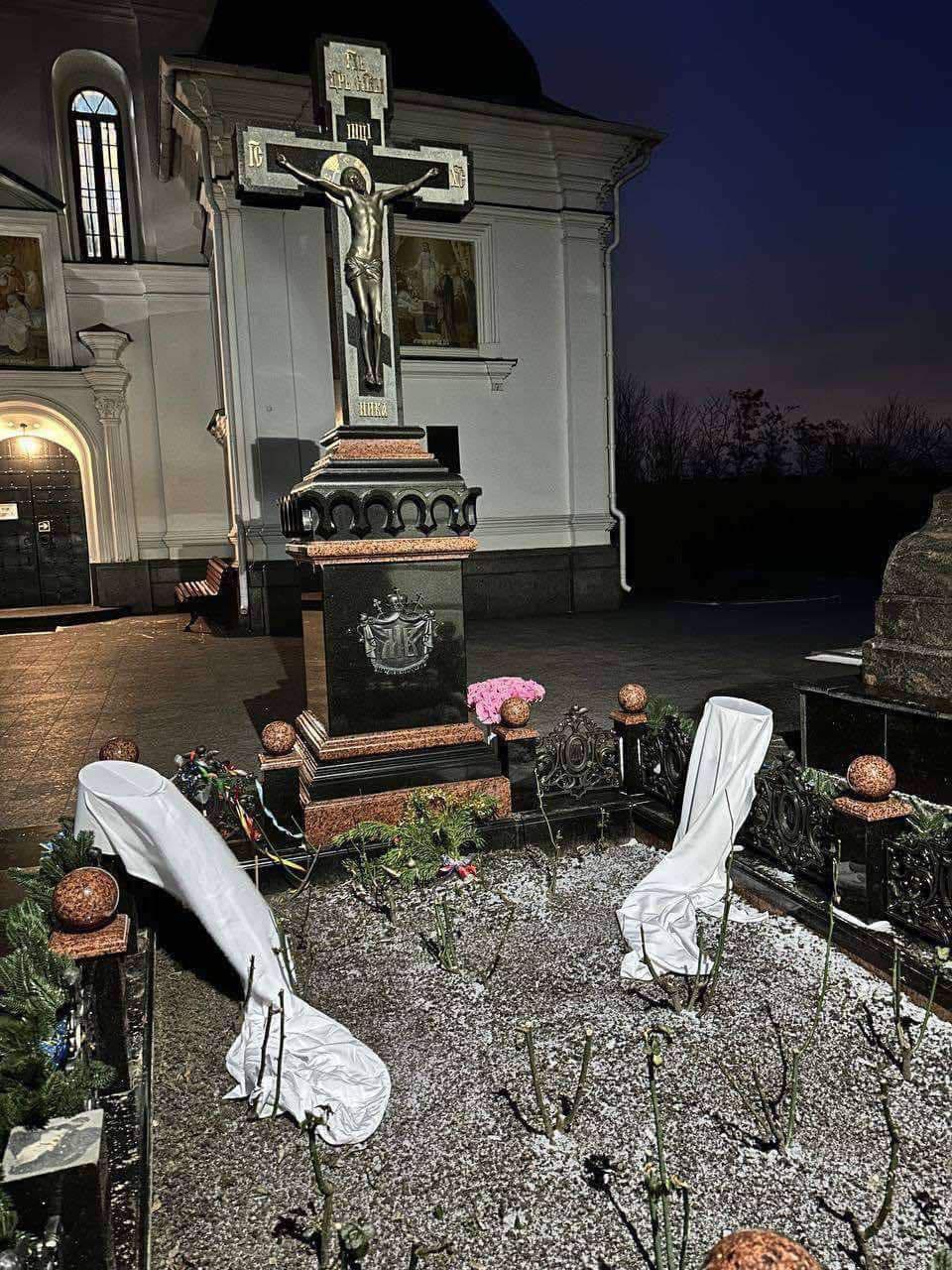 A klobuk is a special headdress usually worn by metropolitans.

Who put them there?

The first thing that comes to mind: where is video surveillance? The grave of His Beatitude Volodymyr (everyone loved and respected him. I hope that in time he will be canonized, he was really a very bright man of God. He passed away in July 2014. It was after his death that what we are all witnessing now began in the UOC-MP) is located in the Lower Lavra, opposite the Academic Church (Nativity of the Virgin), very close to the Metropolitanate.

That is, this patch cannot but be equipped with surveillance cameras.

In principle, putting a klobuk on a grave is not a criminal offence, but it is interesting how everything unfolded.

What the hell anyway? Anything mystical?

That's right: devilry and something mystical, and it has nothing to do with the Orthodox faith.

It should be explained that, unfortunately, there are many people in the Lavra who not only sincerely believe, but actually practice all kinds of superstitions, such as "rites" and so on. Pavlo (Lebid), aka Pasha (Mercedes) is the top one (but not the only one). When some objects that can theoretically be associated with a person are left on someone's grave (in this case, a white klubuk, which is the Metropolitan's headdress), it is a kind of "evil eye", which is supposed "to get rid of a person".

But I would really like to ask you: do not laugh. Yes, it is ridiculous, but try. "What does this have to do with faith in God," you may ask? "Nothing at all," I will answer.

So they left two hats on the grave. Then what?

When Pavlo (Lebid) became aware of the discovery, he, according to witnesses (and there were many of them), was naturally scared. Deeply frightened. Because he immediately took it personally. As if someone from his close circle wants to destroy him.

Well, okay, one klobuk is for Pavlo, but the other one is for whom?

Since we do not know for sure who did this nonsense and why (and this is, pardon me, nonsense indeed), it is difficult to say for sure.

There are many theories. One of them has to do with the famous painting on the upper gallery of the Holy Dormition Cathedral.

Yes, the same cathedral, where on 7 January, Orthodox Church of Ukraine head Epifaniy, for the first time in 336 years, held the service of the Ukrainian local church.

You remember the image under the conventional title "Me and Two Primates". Below are Pavlo (Lebid) and incumbent Metropolitan Onufriy, above them is late Volodymyr (Sabodan). 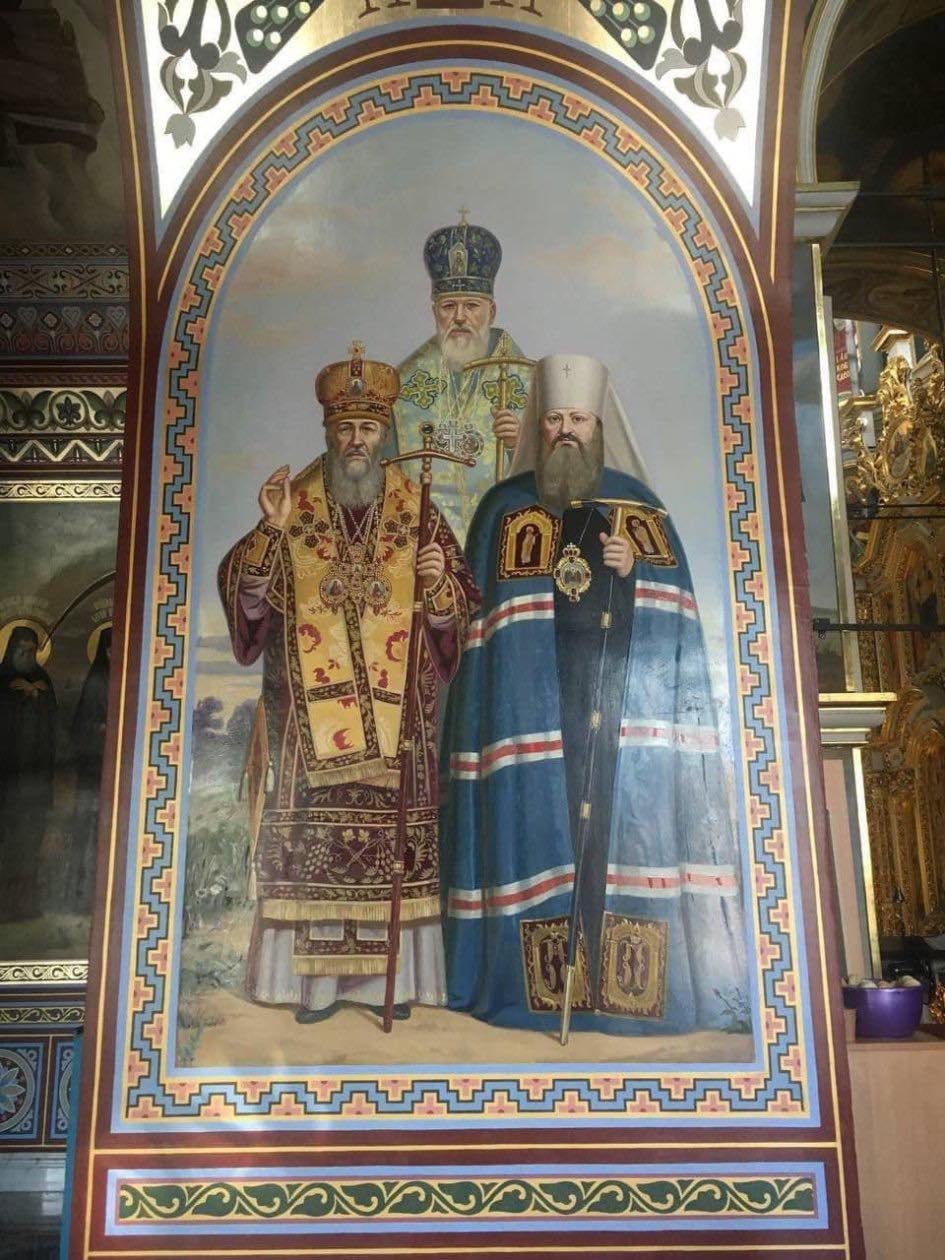 
Indeed, having a painting of the supreme clergy of the church, its famous parishioners and donors is an absolutely normal practice in Orthodoxy. You can find many such examples, if you wish. Literally in every monastery, in every other church. But since we are talking about Pavlo and the Holy Dormition Cathedral (which the UOC-MP rented from the state and any significant changes should have been agreed with the management of the reserve), everyone was outraged.

However, this is not what is important now.

The following logic is primitive, but it is still plausible: Volodymyr has already rested, and two white klobuks, as if referring to the two incumbent metropolitans (Onurfiy and Lebid), "are" found on his grave.

You understand, a klobuk is not a T-shirt that you can buy on every corner. Moreover, it is impossible to imagine that someone else will leave it on the grave in the Lower Lavra at night (yes, it is generally open to visitors, but during "working hours"). Plus, the place where His Beatitude's grave is located is very "passable", it is difficult to stay unnoticed.

That is, it was someone "local", a conditional "secret supporter of the OCU", who "played a trick". And since Pavlo believes in the "evil eye" and similar rubbish, he got scared.

So why burn them?

Obviously, the decision was not made immediately. After all, the "gift" was found in the morning but was not burned until the evening. Approximately between 5 and 7. This is easy to establish because the chants from the service in the Academic Church can be heard in the background (the service is also broadcast outside for people there to listen).

Again: L is for "logic" (that is, anti-logic). The process was not only filmed on video, but it was also done during the service near the church (and the grave, let me remind you, is very close, literally "under the threshold"), with a lot of people walking around. It is clear that such an action cannot but attract their attention.

Well, someone really wanted to burn them, but why do it on the grave? Why didn't they take it somewhere in the bush?

Because we are talking about damn shamanism. According to the voodoo rules, or how I should properly call such a "ritual", the "gift" cannot be moved (preferably not touch it at all), but must be destroyed on the spot.

That is why Lavra cellarer Filaret was instructed to pour gasoline (or some other flammable mixture, we can see it on the video in a plastic canister) on the discovery and set it on fire. The voices of two other accomplices (perhaps one of them is the author of the video) are clearly heard on the video. One tells Filaret "be careful", while the other says "don't burn your beard".

It is absolutely clear that:

A) it was not Filaret's idea,

B) being an ordinary cellarer, he simply could not do it himself,

C) the only person who could have given such an order (and demanded the video as evidence) is Pavlo Lebid.

Filaret's actions are punishable under the Criminal Code due to vandalism and mockery of the burial site. It cannot be called anything else.

Obviously, he should be interrogated by law-enforcement agencies (also his accomplices should be identified and interrogated) and confess who gave him the criminal order.

With a high degree of probability, in the future this "brick" will lay the foundation for deciding the fate of the Lower Lavra. Today, the Lower Lavra is still being leased indefinitely by the Moscow Patriarchate, but the state (read: the owner of the property) has many questions about the aspects of this "lease": from business activities (development, adding of additional floors, extensions, etc.) to acts of vandalism.