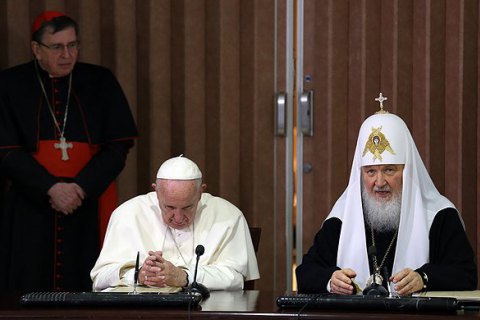 The Kiev Patriarchate of the Ukrainian Orthodox Church is disappointed by the joint statement issued by Pope Francis and Russian Patriarch Kirill.

The press service of the Kiev Patriarchate (KP) said on its official website that the KP always supported dialogue between confessions and religions, however this time it felt it should agree with the critical assessments of the declaration.

"Our church shares disappointment with certain clauses of the joint declaration signed by the Catholic Church and the Moscow Patriarchate in Havana on 12 February 2016, including clauses 25, 26 and 27 of this document... The mentioned clauses of the declaration follow the best examples of secular diplomacy, are full of ambiguous hints, biased assessments and unfounded statements. It is our belief that the document, which should have presented the position of the churches to believers and the world, should not have touched upon the issues mentioned in clauses 25-27 rather than cover them in this form," the statement reads.

The KP has described as unacceptable the situation when decisions on Ukraine and Ukrainian church and public affairs are taken in the absence of Ukraine's representatives and with disregard to their position and opinion.