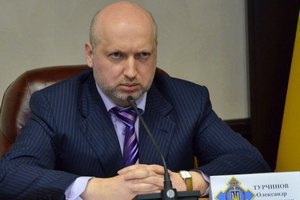 The secretary of the National Security and Defence Council (NSDC) of Ukraine, Oleksandr Turchynov, has said the Russian Armed Forces and pro-Russian militants in Donbas are preparing for active warfare against Ukraine.

"All these military exercises are held in the immediate vicinity of Ukraine's eastern border. What is more, the so-called 1st and 2nd army corps on the temporarily occupied areas of Donetsk and Luhansk regions are also holding exercises within the framework of the comprehensive snap check of the combat readiness of the Russian Armed Forces. This is yet another evidence that these occupying unit are an integral part of the Russian army," it said.

"In conclusion, we can assert that the Russian Armed Forces together with the 1st and 2nd army corps and other units of the occupying troops deployed on the temporarily uncontrolled territories of Ukraine are holding active preparations for an aggressive warfare, which is a direct threat to our country," the website quoted Turchynov as saying.

Russia announced a snap check of the armed forces' combat readiness on 8 February. It also said it was going to resume sending humanitarian convoys to Donbas as of 18 February.