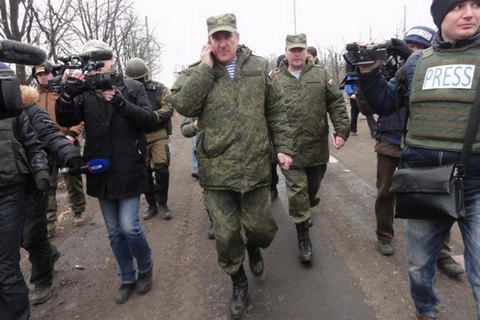 The Security Service of Ukraine (SBU) suspects Russian officers of the Joint Centre for Control and Coordination (JCCC) of Cease-Fire and Stabilization of the Line of Contact of aiding and abetting terrorist organizations in Donbas and opened criminal proceedings against them.

SBU chief Vasyl Hrytsak said at a briefing on 9 February that during the last rotation of the Russian part of the JCCC in late January-early February, some materials were confiscated from the Russian officers which may attest to their collusion with the militants.

These were training materials and manuals on the use of modern tank units in combat conditions, on the use of grenades and mines to blast bridges and buildings, on the use of the Grad, Smerch and Uragan multiple launch rocket systems, on urban warfare and on the basics of defeating the enemy in combat. The Russians were also found to carry propaganda materials labelled "confidential", the insignia and flags of the self-proclaimed Donetsk People's Republic [DPR].

Several officers had the documents showing that they were awarded by the DPR chieftains in repelling the "aggression by the state of Ukraine".

"We firmly believe that what the Russian officers say is different from what they do in fact," Hrytsak said.

On 2 February, the SBU opened criminal proceedings under Article 333 (violation of an international transfer of goods subject to state export control) and 258-3 (aiding and abetting of a terror group).