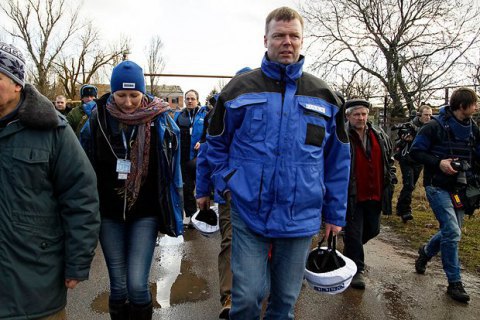 The militants observed the cease-fire in the antiterrorist operation (ATO) area while representatives of the OSCE Special Monitoring Mission (SMM) were in the area. However they resumed fire already after 0400 p.m., the ATO HQ has said on Facebook.

"The cease-fire was observed near Donetsk airport due to the arrival of the OSCE SMM headed by Alexander Hug in the area of Donetsk, Yasynuvata and Avdiyivka. At about 0400 p.m., the terrorists fired with an anti-tank grenade launcher at the Zenit position near Avdiyivka," the statement reads.

The militants used 120-mm and 82-mm mortars banned by the Minsk agreements against the ATO strongpoints near Novotroyitske. Later they used an infantry fighting vehicle, grenade launchers of various systems and small arms. Enemy snipers were operating in the area of Opytne and Maryinka.

They fired with 120-mm mortars near Shyrokyne and with grenade launchers near Mayorsk and Luhansk.

Overall, 13 separatist attacks have been registered since the start of the day.