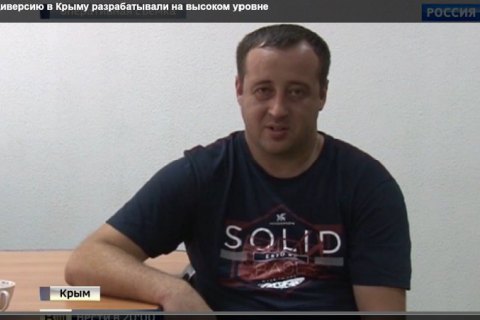 The Crimean human rights group has said it has possibly identified one more person detained in Crimea back in August within the framework of the so-called case of "Ukrainian saboteurs".

They believe this can be Volodymyr Prysych from Kharkiv. His whereabouts is unknown. He can be held in a remand centre in Simferopol or in Moscow's Lefortovo.

Russian media previously reported, quoting sources in the Russian FSB (Federal Security Service), that nine "Ukrainian saboteurs" were detained in Crimea. Shown on the Rossiya One TV, a man, introduced as a long-haul driver from Kharkiv, Volodymyr Prysych, said he was recruited by Ukrainian intelligence in January 2016 to drive around Crimea and collect information about Russian military hardware deployed on the peninsula.

On 10 August, the Russian FSB said it had detained "Ukrainian saboteurs" allegedly plotting terror acts in Crimea. The Ukrainian authorities dismissed the allegations and said the arrests were acts of provocation.

The FSB described a resident of Zaporizhzhya Region, Yevhen Panov, as one of the "organizers". Two more names were released in a while: Yevpatoriya-based construction contractor Andriy Zakhtey and Redvan Suleymanov, who was detained three weeks before the FSB statement on the alleged terror plot.

Since then, the Russian authorities regularly reported on the detention of "Ukrainian scouts and saboteurs" in annexed Crimea.