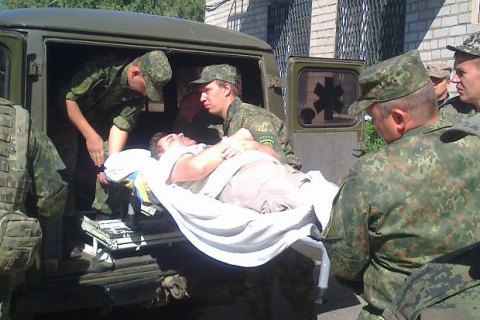 On 19 July, three Ukrainian soldiers were killed, and three others were wounded in an explosion on an unknown explosive device near the village of Novotoshkivske in Luhansk Region at around 18:00. Another soldier was killeed by an enemy sniper around noon in Maryinka, Donetsk Region.

As reported by ATO headquarters on 20 July, terrorist formations 21 times violated the ceasefire during the past day. In 13 instances, ATO forces returned fire.

In the Luhansk sector, the enemy fired the IFV armament at Ukrainian military stationed in Novozvanivka. The militants also fired grenade launchers and heavy machine guns at Ukrainian defenders in Novooleksandrivka, and small arms - at Stanytsya Luhanska.

In the Mariupol sector, ATO strongholds at Vodyane and Hnutove were shelled from grenade launchers. At about 20:00, the enemy fired 82-mm mortars at Ukrainian defenders of Hnutove.

In the Donetsk sector, the Russia-backed terrorist formations continued the shelling of Avdiyivka's outskirts from grenade launchers and small arms. At about 11 pm, the militants used a 120-mm mortar to pound the positions of the ATO forces in Piski. An enemy IFV fired at Luhanske.

At about 7:00 pm, the enemy fired heavy machine guns at the residential quarters of Maryinka, and fired grenade launchers at the village of Zaitseve at 22:00.

On 18 July, two Ukrainian military were killed and four were wounded in action in Donbas.