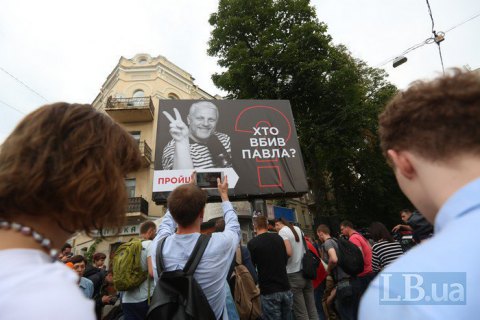 About 300 people on 20 July marched in the center of Kyiv in memory of journalist Pavel Sheremet who was killed on this day a year ago. The action began at around 8:15 on the site of the journalist's death, the crossing of the Bohdan Khmelnitsky and Ivan Franko streets. The protesters laid flowers and hung a banner on the house with an appeal to find the killers of the journalist.

After the ceremony, they went along the Khreshchatyk St. to the Presidential Administration where, using they stencilled on the asphalt the inscriptions with black paint "Who killed Pavel?"

The procession ended outside the Interior Ministry building.

The protesters sated dissatisfaction with fact that the twelve months of investigation into the murder failed to bring results.

Sheremet was killed on 20 July last year in the center of Kyiv in a car bomb blast. The case of the murder of a journalist is being investigated by the National Police.

Pavel Sheremet is a Belarusian, Russian and Ukrainian journalist for television, radio and print periodicals. In the 1990s and 2000s he headed special information projects department of the Russian television channel ORT, later – Channel One.

The last five years he lived in Kyiv, working for Ukrainska Pravda web publication and the radio Vesti.