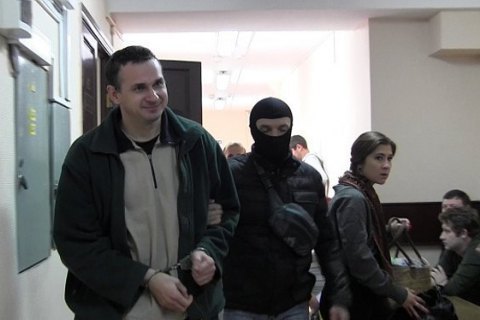 Ukrainian film director Oleh (Oleg) Sentsov, who has been on a hunger strike in a Russian prison for 28 days now, has written a letter to rights activists Nikolay and Tatyana Shchur. They handed a photo of the letter over to the Ukrainian news website Hromadske.

"Hello, Tatyana and Nikolay! I'm glad to have received your letter with the news. Thank you for it and everything you have been doing for me and Sasha [another Ukrainian political prisoner in Russia, Oleksandr Kolchenko]. I know that he is also in but how could he with his health and constitution? But as Bukowski rightly put it, one should not dissuade him. If a person made a decision, let it be so.

By the way, I'm not a fan of Bukowski but I deeply respect him as a person.

Say hi to him for me and thank you for the advice. However, I knew all of this even before I started a hunger strike, so I was prepared for this conscious step, but, anyway, thanks for the care. I'm take good care of here. I'm under the constant monitoring of a doctor, tests, examinations, drips. As for the fourth week of the flight, the pilot feels more or less fine! We'll see what happens next but everyone understands that I will not give up, therefore they are preparing options to further support my health. So, do not worry about this yet. These days I was moved from a cell to a local medical ward of the camp and given a separate room. So, I'm now a sick prisoner not just a prisoner. :))

Generally speaking, no more special news. So write back if there is something interesting, but you know our needs: in essence and for every day.

Big hi to all our and simply good people.

A board of prison doctors examined Sentsov yesterday. No conclusions were released.