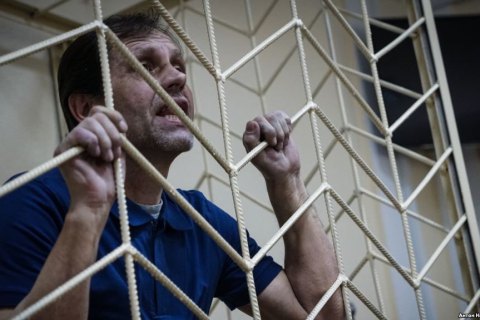 The life of Ukrainian activist, Crimean resident Volodymyr Balukh is in danger, the press secretary of the Ukrainian Foreign Ministry, Maryana Betsa, has said.

"Political prisoner Balukh has been on a hunger strike for over 80 days in occupied Crimea. His life is in danger. We demand his release," he tweeted.

Balukh has been refusing food in protest against his judicial persecution. He wants to be exchanged and brought to mainland Ukraine.

The Russia-controlled authorities in Crimea charged him with arms storage and sentenced to three years and seven months in a colony settlement and a fine of 10,000 roubles (160 dollars).

He did not plead guilty.

Balukh is a staunch supporter of the Ukrainian authorities and Euromaydan protests. Even after the peninsula was annexed by Russia, he had a Ukrainian flag flying above his house. The village council head demanded that he take it down or else face consequences.