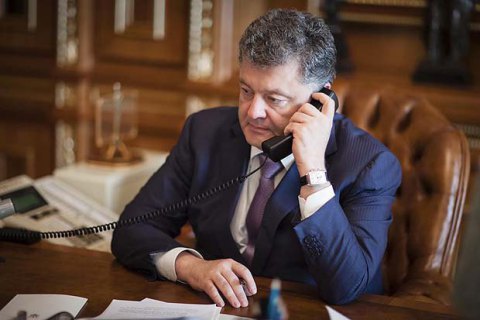 According to Poroshenko's website, they discussed the issue of the release of Ukrainian political prisoners who are on the territory of Russia and temporarily occupied territories.

"The head of the Ukrainian state drew attention to the hunger strike of Ukrainians and expressed concern over the deterioration of their health status. It was agreed that in the near future the ombudspersons of both countries would visit the prisoners," Poroshenko's office said.

The Kremlin website also said that the agreement on the visits concerns both countries: Tatyana Moskalkova will visit Russian citizens imprisoned in Ukraine, and Lyudmila Denisova will check on Ukrainian citizens in Russia.

Poroshenko and Putin also talked about the situation in Donbas and the course of implementation of the Minsk agreements.

Last time Poroshenko and Putin spoke on the phone in February 2018 . The conversation took place on the eve of a planned but cancelled meeting of the foreign ministers of the Normandy Four in Munich.

Poroshenko later said that the conversation concerned two topics: peacekeepers and the release of hostages.

The foreign ministers of the Norman Four will meet in Berlin on 11 June. The issue of political prisoners will be discussed among the priority issues.