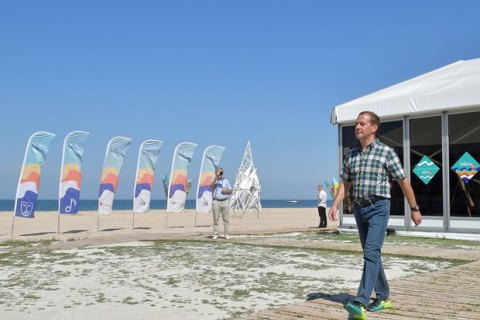 The Foreign Ministry has protested Russian Prime Minister Dmitriy Medvedev's visit to Crimea and Sevastopol which had not been agreed with Ukraine.

Medvedev's stay in Crimea is a "blatant violation of the state sovereignty and territorial integrity of Ukraine, Russia's cynical and demonstrative neglect for generally accepted norms of international law, commitments under bilateral and multilateral agreements, to which Ukraine and Russia are parties, including the UN Charter and UN General Assembly resolutions".

The Foreign Ministry said that it had repeatedly warned that any unauthorized visits by Russian officials to Crimea and Sevastopol were unacceptable.

On 29 July, Medvedev visited occupied Sevastopol to attend the Russia naval parade and, according to local media, to discuss the city's development problems such as its dilapidated infrastructure and failed tourist season.