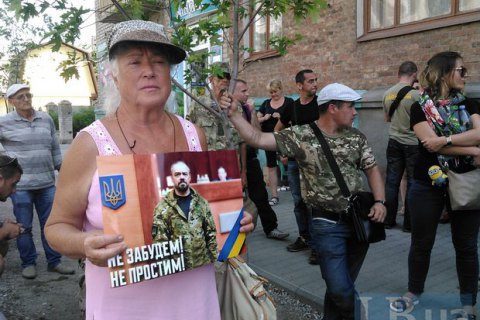 Public activists, local residents and Donbas war veterans have rallied in Berdyansk, demanding a fair and objective investigation into the murder of Vitaliy Oleshko, according to Interfax-Ukraine.

Oleshko was killed with shots in the back from a rifle in central Berdyansk on 31 July.

Before the rally, an unidentified person threw a bottle of red paint at the door of the city council, which ran down into a puddle there. Other participants were not aggressive.

They said they were going to find out who had killed Oleshko and why, insisting on regular progress reports by police.

District police station representative Oleh Fomichev, who came out to talk to the crowd, said he could not disclose details of the investigation. He explained that five suspects detained in the case were held in the Berdyansk remand centre.

The activists asked police for protection for witnesses of the crimes and Oleshko's relatives. They said Oleshko had repeatedly said that he had been threatened.