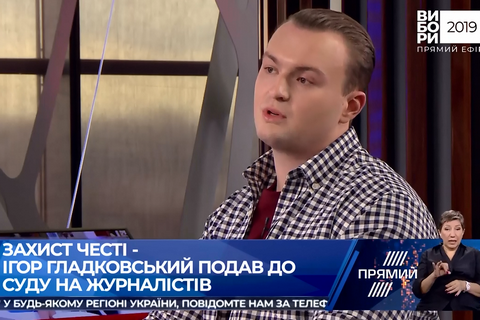 Ihor Hladkovskyy, a suspect in the corruption scandal around the defence concern Ukroboronprom, has said that a certain oligarch can be behind the journalistic investigation by Bihus.info which allegedly implicated him in smuggling military hardware parts from Russia and reselling them at inflated prices in 2015.

"There was no investigation at all. What the journalists say about the three years of investigation and monitoring is all lies. This information has been fully put together from different pieces, sold and ordered by a certain oligarch to build a core rhetoric in the political campaign of certain candidates… Mr [Ihor] Kolomoyskyy, as everyone knows, is a serious sponsor of both [Volodymyr] Zelenskyy and [Yuliya] Tymoshenko who are absolutely interested in this and are the creators of this story," he said in an interview with Pryamyy TV.

He said that he would dot all the I's in his new video blog stories to be released soon.

He also denied having neither friendly nor business relations with Vitaliy Zhukov mentioned in the Bihus.info investigation.

He insists he "never stole and never will".