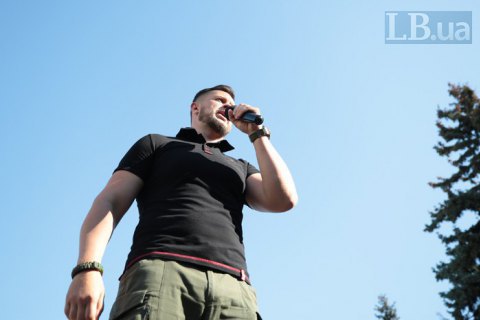 The far-right National Corps party is planning to hold another rally against corruption in the defence industry on Saturday, 16 March, its leader MP Andriy Biletskyy has said at a news conference.

"Our actions are a peaceful mass protest until our four demands are met in full. We are inviting all concerned Ukrainians to join these rallies. On Saturday, we are going to hold an event without party colours, " he said.

In particular, the National Corps demands the arrest of the former first deputy secretary of the National Security and Defence Council, Oleh Hladkovskyy, his son Ihor Hladkovskyy, Vitaliy Zhukov, Andriy Rohoza, the management of the state-run defence concern Ukroboronprom and directors of all state companies involved in the case on corruption in the defence industry.

According to Biletskyy, he expects "much more than 10,000 people" to take part in the 16 March rally.

He blamed the violent clashes during the 9 March events in Kyiv and Cherkasy on police.