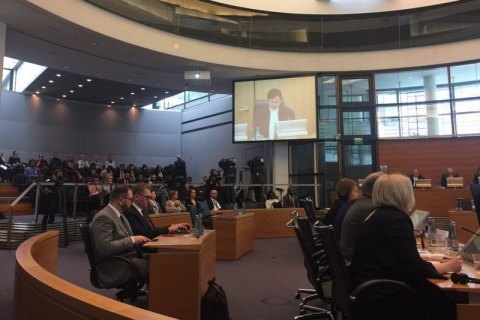 The International Tribunal for the Law of the Sea (ITLOS) has obliged Russia to immediately release 24 Ukrainian sailors and three Ukrainian vessels captured near the Kerch Strait in November 2018.

President of the Tribunal Jin-Hyun Paik read out the award in Hamburg (Germany) on 25 May, according to UNIAN.

Russia refused to attend the ITLOS hearing on Ukrainian sailors.

In particular, the ITLOS ordered Russia to immediately release the Ukrainian vessels, namely the tugboat Yany Kapu and two armored naval boats Berdyansk and Nikopol, and return them to Ukraine.

"Having examined the measures requested by Ukraine, the Tribunal considers it appropriate under the circumstances of the present case to prescribe provisional measures requiring the Russian Federation to release the three Ukrainian naval vessels and the 24 detained Ukrainian servicemen and to allow them to return to Ukraine in order to preserve the rights claimed by Ukraine," Jin-Hyun Paik said.

At the same time, he added that "the Tribunal does not consider it necessary to require the Russian Federation to suspend criminal proceedings against the 24 detained Ukrainian servicemen and refrain from initiating new proceedings.

"However, the Tribunal considers it appropriate to order both Parties to refrain from taking any action which might aggravate or extend the dispute submitted to the Annex VII arbitral tribunal," he said.

The Ukrainian crews then reversed and started moving towards the exit from the strait, but the Russian ships began the pursuit. They opened fire and eventually captured the ships and their crews. On 27-28 November, a Russia-controlled court in Crimea arrested all the Ukrainian sailors, including the injured ones, for 60 days. They were accused of "illegally crossing the Russian border". The arrests have been extended several times since then.