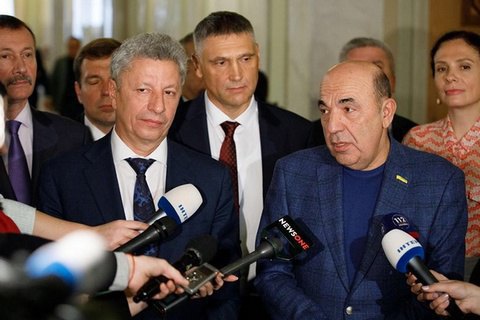 The Opposition Bloc party has compiled an election list ahead of the 21 July snap polls.

The list, which was made available to LB.ua, the so-called group of Yuriy Boyko and Serhiy Lyovochkin did not join forces with politicians close to Ukraine's wealthiest businessman Rinat Akhmetov despite earlier speculations.

Neither Vadym Novinskyy nor Oleksandr Vilkul are on the list.

No 1 on the list is Yuriy Boyko, followed by Vadym Rabynovych, Viktor Medvedchuk, Natalya Korolevska and Serhiy Lyovochkin.

The Opposition Bloc was born out of the debris of Yanukovych's Party of Regions for the sole purpose of getting elected to parliament in 2014. It received 9.43%. The Opposition Bloc had two main shareholders – the groups of Akhmetov and another businessman Dmytro Firtash – who shared everything 50 to 50.

The faction was co-chaired by Oleksandr Vilkul and Yuriy Boyko, the former representing the Akhmetov wing and the latter standing for the Firtash group. In November 2018, the so-called Boyko-Lyovochkin group split from the Opposition Bloc, having formed a new political platform with Rabynovych's For Life party, whose actual leader is Viktor Medvedchuk.

There were speculations in late May that the Opposition Bloc may reunite.