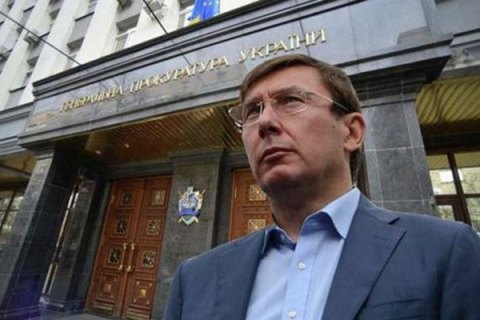 Prosecutor-General Yuriy Lutsenko has registered three criminal proceedings based on the results of a meeting of the trilateral contact group in Minsk, where some suggested that economic ties with separatist-controlled areas in Donetsk and Luhansk regions (ORDLO) could be restored and a mutual moratorium on return fire in Donbas could be imposed.

In his video address, Lutsenko said that these were factual cases, that is, they were not directed against someone personally. At the same time, he warned "revenge-seekers and capitulators" against playing with the Ukrainian law.

"Today, I personally logged in the register of pre-trial investigations a high-profile case on the fact of preparations for financing terrorism, that is, actions committed with the purpose of financial or material support of a terrorist group committed by a preliminary agreement of a group of individuals. This is for those who believe that you can restore relations with terrorist organizations," Lutsenko said.

“One more case concerns the fact of preparations for obstructing the legitimate activities of the Armed Forces of Ukraine and other military units in a special period. And one more case concerns the fact of high treason, meaning actions deliberately committed by a Ukrainian citizen against the sovereignty, territorial integrity, inviolability, defence capability, state economic and information security of Ukraine and assistance to a foreign state in subversive activities against Ukraine," he said.

The trilateral contact group on the settlement of the situation in Donbas had its first meeting after the presidential election in Ukraine on 5 June. After a long break, the Ukrainian delegation was chaired by former President Leonid Kuchma.