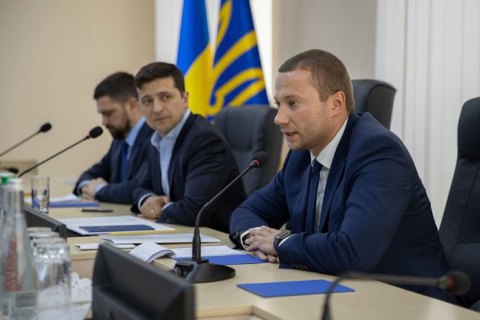 Speaking in Kramatorsk, Donetsk Region, Zelenskyy started by saying he wants to deny rumours that it is forbidden to speak Russian in Donbas and "therefore one send tanks there to defend Russian speakers".

"To avoid any manipulations on the matter, I will continue in Russian," the president said.

The new head's priorities, according to Zelenskyy, are to improve the infrastructure and ensure timely payments and pensions.

“The whole world is keeping a close eye on Donbas - during my meetings abroad I raise this issue as a priority. And the main thing is that the whole of Ukraine is looking at Donbas. We have to show everyone clearly, especially Ukrainians in the occupied territory, that we are one country,” Zelenskyy said.

The president commented on reports that Kyrylenko's family members who live in the occupied territory and about his brother who has reportedly collaborated with the militants.

"His parents consider themselves Ukrainians, they do not want to move anywhere. As for his brother, it is a sensitive issue for Pavlo, so I took the liberty to say this. He does not keep contact with his brother over political differences. Pavlo himself left the occupied territory and has worked in Ukraine since the first days of the occupation. Many families are split because of the war. I ask you not to divide us into "our" and "their", people who live in the temporarily occupied territories today. They are Ukrainians," Zelenskyy stressed.

For his part, Kyrylenko thanked the president for his trust and promised that all the tasks would be completed.