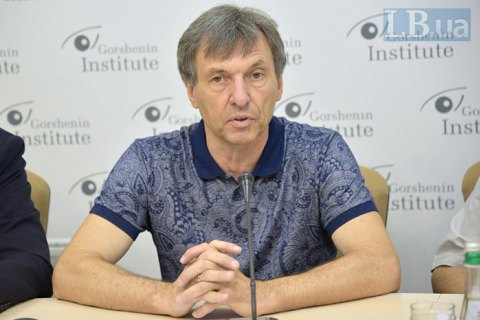 Mykola Siryy, a lawyer and senior researcher at the Institute of State and Law of the National Academy of Sciences of Ukraine, has said that today both the legislation and the bodies that form the political process and political system do not do what they are supposed to do.

As a result, the political process in Ukraine has all the features of a show, he said during a roundtable discussion on "The main question of modern Ukraine's political system" at Gorshenin Institute.

“When we say that our process is not a political process but a show, we are actually telling the truth. And this truth is not journalistic, that is, this is a purely legal conclusion. Because elections can be called a political process as long as they have all the elements and attributes of a political process. If there are not all elements and attributes of a political process - a clear programme, a clear name or a clear political toolkit - then we have a soap bubble. We have a show toolkit. We have a massive deception in the country and we are exposing ourselves to serious danger. Today, in 2019, we are faced with the fact that the political process has been transformed into a show, and in this process the entire set of show tools is permitted for use. Political tools were emasculated from the political process. Somebody calls it innovation, thinks we are “discovering America” in this way. But no, this is not a new page and not an innovation, it is called political quackery. These are things that from a conservative-political point of view can be assessed as negative phenomena," Siryy said.

The expert also stressed that any party without an ideology or political face creates the preconditions for the emergence of corruption.

“If a party comes without a political face or a clear ideology comes to power, this will create the best ground for corruption. Such a party begins to self-destruct because of corruption processes. This is because there are no ideological tools for management, the party is controlled in the manual mode, through personal connections. In this mode, it is impossible to contain the trend of corruption. And as of today, mankind has not created the tools to effectively combat corruption in the event that a party without an ideology or a clear political face begins to rule the society," he concluded.